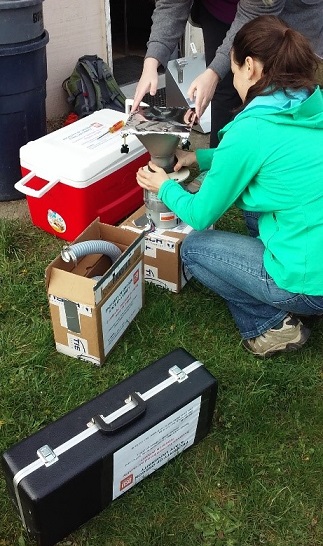 PAHs are a large class of hazardous organic compounds commonly found in the environment and are among the top 10 contaminants of concern at Superfund sites in the United States. The SITC resides within 10 miles of two large oil refineries, which are major sources of PAHs, raising concern within the Swinomish community about PAH exposure and other impacts on air quality.

Together, OSU SRP Center researchers and the SITC initiated a study to learn more about PAH exposure in the community. Volunteers wore silicone wristband passive samplers for seven days and completed daily activity diaries about their contact with potential sources of PAHs. The researchers analyzed the wristbands for 62 different PAHs and found that all study participants were exposed to different amounts and types of PAHs. They also observed seasonal differences, detecting more PAHs in the winter than in the spring.

According to the researchers, this community-based participatory project raised awareness of PAH exposure in the Swinomish community. More importantly, the study empowered research participants to reduce their exposure to sources of PAHs in the home, including woodstoves, candles, and incense. After the study, participants reported using their woodstove less often for ambiance, getting their woodstove cleaned and serviced before using it the following season, and buying soy or beeswax candles that have lower PAH emissions.