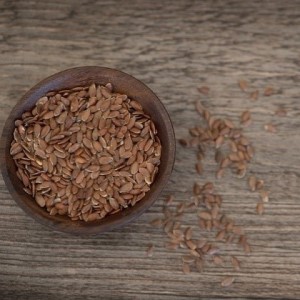 A novel synthetic compound made from flaxseed can protect heart function in mice with sepsis, according to new research in collaboration with the University of Pennsylvania (Penn) Superfund Research Program (SRP) Center. Sepsis is an inflammatory condition that develops in response to infection and can lead to heart failure and death.

Penn SRP Center researcher Melpo Christofidou-Solomidou, Ph.D., leads a Center project focused on developing a novel synthetic flaxseed compound, called LGM2605, as a preventive treatment for diseases associated with asbestos exposure. Asbestos is a naturally occurring mineral that was widely used in commercial products for insulation, sound absorption, and flame resistance until the 1990s. Exposure to asbestos is associated with inflammation and oxidative stress in the lung, which can lead to a rare form of lung cancer called mesothelioma.

Christofidou-Solomidou has found that LGM2605 may be a promising approach to prevent the inflammation and oxidative stress that leads to lung disease following asbestos exposure in mice. The new study shows how LGM2605 also can help reverse other inflammatory diseases, like sepsis, in mice.

In the current study, researchers found that when mice with sepsis were given LGM2605, their heart function improved. The authors found that LGM2605 reduced oxidative stress in the heart and increased the abundance and function of mitochondria, which are responsible for producing energy in cells. According to the authors, restoring energy production in the heart is critical for repairing heart function and improving survival from sepsis.