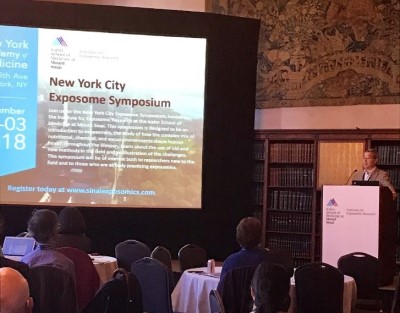 Wright gave introductory and closing remarks during the symposium.
(Photo courtesy of the Institute for Exposomic Research at the Icahn School of Medicine at Mount Sinai)

Current and former Superfund Research Program (SRP) researchers described their work and learned from others as part of the New York City Exposome Symposium Nov 2 – 3. The symposium delved into innovative approaches in exposomics, the study of how the complex mix of nutritional, chemical, and social environments shapes human health throughout the lifespan.

The meeting was organized by the Institute for Exposomic Research at the Icahn School of Medicine at Mount Sinai. Robert Wright, M.D., a professor and chair of environmental medicine and public health at Mount Sinai, directs the institute. Wright previously worked with the Harvard University SRP Center for 20 years, where he progressed from a trainee to overall center director.

As part of the meeting, University of California, Berkeley SRP Center researcher Stephen Rappaport, Ph.D., described his work to capture diverse exposures and interactions between genes and the environment by measuring compounds in blood or other archived biospecimens. According to Rappaport, characterization of the exposome requires a battery of untargeted methods, notably metabolomics and proteomics, which are large-scale studies of metabolites and proteins. In addition to his work to characterize exposures based on blood samples, Rappaport also has shown that saliva may be a practical alternative to blood for characterizing a person's exposures. His work shows how saliva contains important molecular information and can be measured over time to construct individual exposure histories and discover risk factors for disease.

"I was surprised at the diversity of the audience and the new directions that they are taking to explore the exposome concept," Rappaport said of the meeting. "Although the exposome was originally conceived in the context of finding causes of cancer, researchers are now using exposomics to emphasize the vast range of exposures and how this knowledge can be used to identify and reduce disease risks."

"No one is exposed to one chemical at a time," Wright said for a recent NIEHS feature. "Everything in life is a mixture, and if we are going to understand why people develop disease, we have to realize that all the factors around us – the built environment, chemicals, social stressors, and nutrition – interact synergistically. The multidisciplinary approach within SRP trained me to think holistically about the impacts of toxic waste and the importance of integrating social stressors, genetics, nutrition, and mixtures in environmental health research," he said.