SRP-Funded Small Business Gears Up to Hit the Shelves

CycloPure, Inc., a small business funded by the Superfund Research Program (SRP), has announced a major advance in their cost-effective water filtration technology called DEXSORB. Their new product, DEXSORB+, works to rapidly remove per- and polyfluoroalkyl substances (PFAS) from contaminated water supplies. PFAS, which have been used in consumer products and aqueous film-forming foams at airports, military installations, and firefighting training sites, do not break down and can accumulate in the environment. 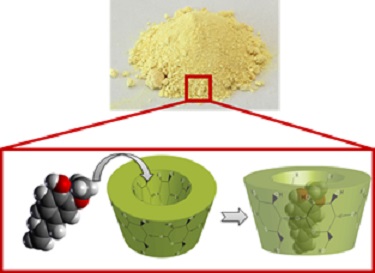 CycloPure’s technology involves cup-shaped structures of cyclodextrin that allow binding and removal of a variety of pollutants.
(Photo courtesy of CycloPure, Inc.)

CycloPure recently announced that in addition to SRP funding, they had raised an additional $3.5 million to accelerate the commercialization of their DEXSORB products. This will allow them to make the technology available to consumers and municipal drinking water plants impacted by PFAS and other contaminants.

The company's line of DEXSORB adsorbents are based on innovative technology that converts renewable cyclodextrins, derived from corn starch, into highly-adsorbent materials capable of eliminating a variety of pollutants from drinking water. In their new DEXSORB+ product, they created a new process that enhances the binding ability of DEXSORB and found that it resulted in a seven-fold improvement in the removal of 20 short and long chain PFAS compounds, including GenX. For example, according to the company, DEXORB+ can remove more than 95 percent of perfluorooctanoic acid (PFOA) and perfluorooctanesulfonic acid (PFOS) even at low concentrations in only 30 minutes.

According to CycloPure Chief Executive Officer Frank Cassou, they are working to make eco-friendly DEXSORB available for home use, in portable water bottles, and for municipal drinking water treatment. They aim to launch their first DEXSORB+ product later this year.