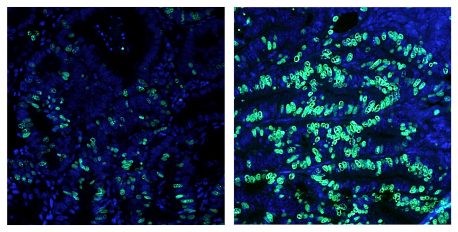 Colon cancer growth, as measured by the number of dividing cells shown in green, is dramatically increased when the FXR-regulated gene network is disrupted by specific bile acids or a high-fat diet.
(Photo courtesy of the Salk Institute)

New research identifies a pathway that explains how high-fat diets can lead to colorectal cancer, a cancer that starts in the colon or rectum. The new findings may help explain why colorectal cancer rates are increasing in adults under 50 years old and open new possibilities for treating cancer.

As you eat, the intestine and colon, commonly referred to as the gut, need to constantly renew its lining to undo routine damage done by digestive acids. To do this, the gut contains stem cells that can replace lining cells when needed. Ron Evans, Ph.D., and postdoctoral fellow Ting Fu, Ph.D., recently discovered that high-fat diets change the digestive acid balance in the intestines, and that triggers a hormone signal leading to rapid growth of stem cells in the gut that could lead to cancer. Evans' lab at the Salk Institute for Biological Studies is part of the University of California, San Diego Superfund Research Program. Their results were recently published in the journal Cell and described in a video.

Evans' team has been studying mice that have a variant of the adenomatous polyposis coli (APC) gene, a tumor suppressor gene that is active in the gut. The variant form does not suppress tumors as well as other APC forms, and mice with this variant APC gene get colorectal cancer faster when fed a high-fat diet. Using this model, the team is investigating the role of digestive, or bile, acids and a hormone-signaling protein call Farnesoid X receptor (FXR) in colorectal cancer.

Based on these results, the researchers suggest that stimulating FXR may be an effective approach for cancer-treating drugs. "This study provides a new way to lower inflammation, restore intestinal health, and dramatically reduce tumor progression," says Evans.