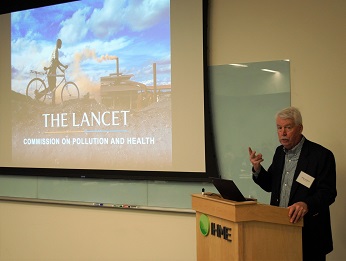 Landrigan, a former SRP grantee who co-authored the Lancet Commission report with Suk and others, presents at the GBD workshop.
(Photo courtesy of Howard Hu)

Environmental health experts gathered March 1 - 2, 2018, in Seattle, Washington, to create a strategic framework for addressing global pollution using the 2017 Lancet Commission on Pollution and Health report. The workshop was convened by the Global Burden of Disease (GBD) project's Pollution and Health Initiative.

Several current and previous Superfund Research Program (SRP) grantees attended the workshop, including Philippe Grandjean, Ph.D., from the University of Rhode Island SRP Center; Philip Landrigan, M.D., from the Ichan School of Medicine at Mount Sinai; Howard Hu, M.D., from the University of Toronto; and David Bellinger, Ph.D., from Harvard University. Landrigan, one of 40 international authors of the Lancet Commission report, discussed plans to establish a Global Pollution Observatory that will collect and curate data on pollution and pollution-related disease to share with the scientific community. According to the report, 16 percent of all deaths worldwide can be directly linked to pollution, such as air pollution, lead, neurodevelopmental toxicants, and climate change. The economic costs associated with pollution were estimated at more than $4.6 trillion per year.

"We realized that it was important to document not only the health impacts of global pollution, but also the measurable costs of pollution as an economic burden," said SRP Director Bill Suk, Ph.D., an author on the report. "This is the first analysis to comprehensively report both aspects."

The GBD workshop and related efforts are exploring ways to enhance data collection, improve communication with decision-makers, and reduce pollution to decrease the burden of disease and associated economic costs around the world.