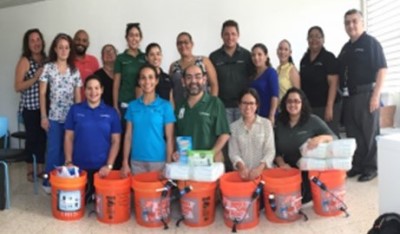 After Hurricane Maria made landfall in Puerto Rico as a Category 4 storm in September 2017, Northeastern University Superfund Research Program (SRP) researchers immediately responded, reaching out to participants involved in an ongoing study on exposure impacts in pregnant women and providing essential supplies. Now, more than one year later, they continue to investigate the effects of Maria, including the potential long-term health impacts from exposure to contaminated water and air.

The Northeastern SRP Center, the Puerto Rico Testsite for Exploring Contamination Threats (PROTECT), began recruiting pregnant women in 2010 to assess the relationship between preterm birth and exposure to potentially hazardous contaminants in Puerto Rico. In the months following the devastation from Maria, PROTECT team members provided supplies, including diapers, mosquito nets, and water filters, and developed educational materials related to potential health impacts of water use. They also continued collecting groundwater and tap water samples, as well as hair and blood samples from study participants.

PROTECT researcher Ingrid Padilla, Ph.D., is comparing tap and groundwater samples collected after the hurricane with previously collected data to see what effects the hurricane may have had on contamination in these water systems. As she explained to Chemical & Engineering News, flooding of Superfund sites may have contributed to a spread of pollutants into water systems, such as trichloroethylene and other chlorinated volatile organic chemicals, and these pollutants have been linked to effects on the liver, kidneys, and immune and reproductive systems. Her team is currently comparing samples they took a month after the storm with those before the storm to see whether the concentrations of some chemicals have increased.