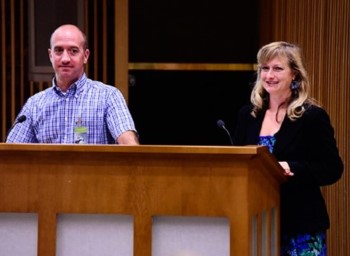 At the July 10 Keystone Science Lecture, Duke University SRP Center researcher Lee Ferguson, Ph.D., discussed his work using non-targeted approaches to identify contaminants in water, dust, and other environmental media. His talk drew a wide audience from across the institute.

Ferguson explained how his team is using tools originally developed to study genes and proteins and applying them to study chemicals in the environment. He described how the traditional approach, called targeted analysis, looks for specific compounds in environmental samples. In contrast, Ferguson's group looks at everything detected in an environmental sample and then tries to identify the compounds. This approach is called untargeted analysis.

"There are 60 to 120 million unknown chemical compounds out there," noted Ferguson. "By combining high-resolution mass spectrometry, chemical databases, and computational approaches, we can assign molecular and structural formulas to unknown compounds." 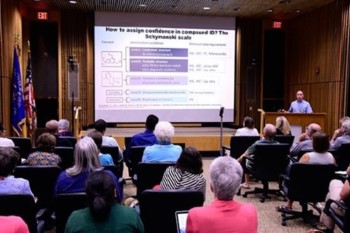 Ferguson described several projects where this approach helped identify contaminants that people may be exposed to in water, soil, or dust. In one example, the team found approximately 55,000 unique compounds in water samples from a variety of sources. They were able to tentatively identify about 300, including agricultural chemicals, pesticides, flame retardants, pharmaceuticals, and plastic additives. Nine of the compounds previously had not been reported as environmental contaminants.

Ferguson's team determined that some of the contaminants had persisted through the wastewater treatment process to end up in rivers. Others were measured in drinking water and, according to Ferguson, likely were introduced through building infrastructure such as pipes.

"Dr. Ferguson's research shows that while there are many compounds people can be exposed to, only a small fraction is easily identified," said SRP Health Scientist Administrator Heather Henry, Ph.D. "Their approaches help to sift through large amounts of data to identify compounds that might be harmful to humans or the environment. This research supports the concept of the exposome, or all the exposures a person experiences over the course of life, which is an important part of the NIEHS Strategic Plan."