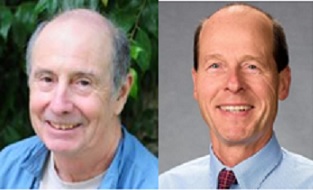 Hammock, left, and Hennig, right, began collaborating nearly 20 years ago to understand the underlying mechanisms of disease and to identify potential targets for treatment.
(Photo courtesy of the University of California, Davis and the University of Kentucky, respectively)

Researchers are one step closer to determining how to prevent blindness from occurring in mice with macular degeneration and diabetic retinopathy, two diseases that affect the eye. This work stems from a collaboration dating back nearly 20 years between SRP-funded researchers Bruce Hammock, Ph.D., from the University of California, Davis, and Bernhard Hennig, Ph.D., from the University of Kentucky.

Their early research showed that exposure to polychlorinated biphenyls damaged the protective barrier of cells that line blood vessels in the body. This damage can lead to oxidative stress, inflammation, and eventually diseases like atherosclerosis, when substances build up on the artery’s walls. They also found that breakdown products of certain dietary fats made this process worse. An enzyme called soluble epoxide hydrolase (sEH), originally discovered in Hammock’s lab, is responsible for breaking down fats in the body after they are metabolized.

Building on these findings, a new paper led by a collaborator of Hammock, Ingrid Fleming, Ph.D., showed that sEH sets off a similar chain of events to produce harmful breakdown products that damage the blood vessels of the eye, leading to diabetic retinopathy, a condition in which the blood vessels of the eye become damaged, and can lead to blindness. Published in the journal Nature, their findings showed that inhibiting sEH prevented mice from developing the disease, and they suggest that sEH inhibitors may offer new treatment options.

“The findings of this paper and the earlier work it builds off of exemplify the uniqueness of the SRP,” said Hennig. “Their emphasis on multidisciplinary research provides opportunities that lead to major scientific discoveries.”