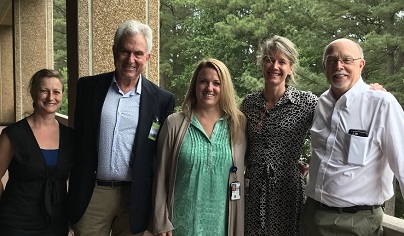 In a May 15 seminar at NIEHS, Michael Karin, Ph.D., detailed the sequence of molecular changes in the liver that eventually lead to liver cancer. Karin, a Distinguished Professor of Pharmacology and Pathology at the University of California, San Diego (UCSD) School of Medicine, is part of the UCSD Superfund Research Program (SRP) Center.

SRP Director Bill Suk, Ph.D., hosted the talk. In his introduction, Suk explained that Karin has studied the relationship between inflammation, cancer, and metabolic disease at UCSD since 1986.

The Karin group is interested in nonalcoholic steatohepatitis (NASH), one of the more serious illnesses in a group of metabolic disorders known as nonalcoholic fatty liver disease (NAFLD). NAFLD, which affects one-third of U.S. adults, starts as simple fatty liver, but 10–15 percent of patients will develop NASH.

"The factors that control the switch from simple fatty liver to NASH are not clear," Karin said, "but we speculate that it is associated with stress in a part of the cell called the endoplasmic reticulum (ER)."

The ER is a network of tubules in plant and animal cells that produce lipid and proteins. Karin and his colleagues decided to test the hypothesis that the ER was involved using mice that are more likely to develop ER stress in the liver.

In these mice, Karin and his colleagues revealed that a high-fat diet increases ER stress, which activates proteins that increase the production of cholesterol and fatty acids. This process gives rise to cell death and inflammation and, ultimately, the progression from simple fatty liver to NASH.

"Not only does Karin’s work in mice provide a new model for understanding the development of NASH, but it may also uncover what happens in the steps from NASH to liver cancer," said Suk.