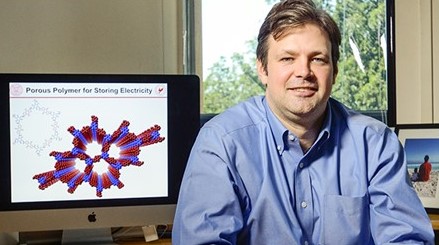 Dichtel is also a professor of chemistry at Northwestern University.
(Photo courtesy of the MacArthur Foundation)

PFASs are a group of chemicals that have been widely used in manufacturing, food packaging, firefighting materials, and commercial household products, such as nonstick products, polishes, and cleaners. Exposure to PFASs, which have been found in drinking water systems, has been linked to weakened immunity, thyroid disease, and cancer.

Currently, activated carbon is the most widely used PFAS remediation technology. Limitations of this approach include susceptibility to fouling by organic matter, energy-consuming regeneration processes, and low affinities for PFASs, resulting in requirements for substantial amounts of materials and energy.

CycloPure's adsorbent technology is based on a family of molecules called cyclodextrins, which are easily made from cornstarch at low cost and form pockets that can efficiently adsorb contaminants. The new technology organizes these naturally "sticky" cyclodextrins into a porous, crosslinked material that captures thousands of contaminants, including PFASs. With its NIEHS grant, Cyclopure is refining its cyclodextrin polymerization process to prepare for scaling up production for commercial use.

Dichtel's breakthroughs in polymerization and material sciences also brought him recognition as one of the top-ten national finalists for the Blavatnik Award for Young Scientists in 2017 and won him a Genius Grant from the MacArthur Foundation in 2015. He was highlighted as one of the "40 Under 40," an innovator who "puts an outsize mark" on Chicago business and nonprofits, by Crain's Chicago Business in 2017. To learn more, check out a video on his polymer research on the Big Ten Network.