SRP Scientists Cited Among the World's Most Influential Scientific Minds

Eight Superfund Research Program scientists are among the 2015 listing of The World's Most Influential Scientific Minds, an annual compendium of "Highly Cited Researchers" by Thomson Reuters, a multinational mass-media and information company. 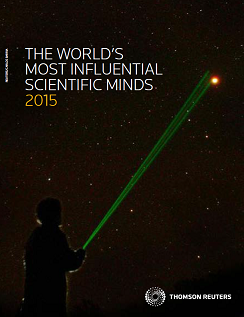 The listing represents a review of approximately nine million researchers producing upwards of two million published studies around the world each year. The authors and their works are recognized as those most often cited by fellow scientists.

The following current SRP grantees were cited in the listing:

The approximately 3,000 highly cited researchers listed in the 2015 report were selected by analyzing citation data over a recent 11-year period (2003-2013) and identifying those who published the largest number of highly cited papers. They also identified hot researchers, whom Thomson Reuters describes as being authors of papers published during 2013-2014 that were cited immediately after publication at extraordinarily high levels. This type of recognition by peers in the form of citations makes highly cited or hot researcher status meaningful. The identification of these individuals is rooted in the collective, objective opinions of field experts within the scientific community.