Some Fish Quickly Adapt to Lethal Levels of Pollution 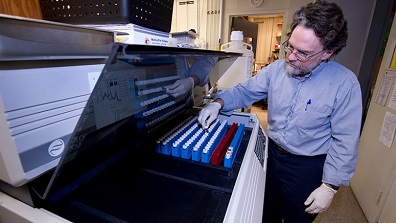 In this latest finding, Hahn, a BU SRP Center project leader, says it does not seem to be just one gene that appears to be responsible for the resistance. It is a group of genes that are all part of the same pathway.

Evolution is working under pressure to rescue some coastal fish from a lethal, human-altered environment. Now, a new study has revealed the complex genetic basis for the Atlantic killifish's remarkable resilience.

The new findings, published Dec. 9 in the journal Science, build on decades of research into the killifish's ability to survive industrial contamination. Superfund Research Program (SRP)-funded scientists at Woods Hole Oceanographic Institution (WHOI) collaborated on the new multi-institutional study, which was led by the University of California, Davis. WHOI biologists and study authors Mark Hahn, Ph.D., and Sibel Karchner, Ph.D., have been studying killifish resistant to contamination in New Bedford Harbor since 1995 as part of the Boston University SRP Center.

WHOI is an independent non-profit organization dedicated to ocean research, exploration, and education. WHOI has had a longstanding collaboration with the BU SRP Center and has housed an SRP-funded research project related to the mechanisms of chemical sensitivity and resistance since 1995.

While environmental change is outpacing the rate of evolution for many other species, killifish living in four polluted East Coast estuaries turn out to be remarkably resilient. These fish have adapted to survive levels of toxic industrial pollutants that would normally kill them, tolerating concentrations up to 8,000 times higher than sensitive fish. To better understand the genetic basis for this adaptation, the research team sequenced the genomes of nearly 400 individual killifish from four non-polluted sites and from four polluted ones. Since the 1950s and 1960s, these polluted sites have been contaminated by industrial chemicals, including polychlorinated biphenyls, dioxins, and polycyclic aromatic hydrocarbons.

Genetic analysis identified hundreds of "hotspots": regions of the genome that appeared to have undergone natural selection in the pollution-resistant killifish. Several of the strongest hotspots, which appeared in all four resistant populations, included genes involved in the previously identified aryl hydrocarbon receptor signaling pathway, which is involved in regulating a number of biological responses.

For more information about the study, see the WHOI News Release.