Visit the 2015 Superfund Research Program Annual Meeting website for agendas and other resources from the meeting.

The NIEHS Superfund Research Program (SRP) annual meeting brought together SRP researchers, trainees, administrators, and partners to share findings and discuss research translation, community engagement, and training. The theme of the meeting, SRP Collaboration for Innovation, encouraged participants to find ways to work across disciplines and with different SRP grantees and partners from the U.S. Environmental Protection Agency (EPA) and the Agency for Toxic Substances and Disease Registry. 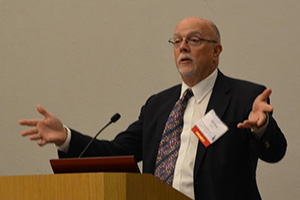 Suk discussed the importance of training the next generation of scientists and highlighted several SRP trainee accomplishments from the past year. He emphasized the importance of tackling data challenges and integrating multidisciplinary research.
(Photo courtesy of Northeastern University)

The meeting was hosted by the Puerto Rico Testsite for Exploring Contamination Threats (PROTECT) SRP Center. The PROTECT Center studies exposure to environmental contaminants and preterm birth in Puerto Rico, which, according to the Centers for Disease Control and Prevention, has one of the highest rates of preterm birth among U.S. states and territories. 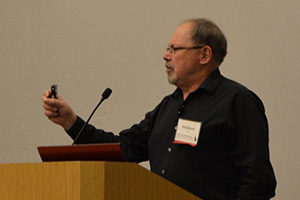 “We are entering a period of disruption in biomedical research and we should all be thinking about what this means,” said Bourne. He described the tremendous potential that big data offers and explained the need for new methodologies, skills, and cultures in biomedical research.
(Photo courtesy of Northeastern University)

A focus on big data

NIH Associate Director for Data Science Philip Bourne, Ph.D., was invited to give a talk on big data as a catalyst for collaboration and innovation. He described community, policy, and infrastructure as the three elements of the digital enterprise. Bourne also emphasized the need for sustainability, collaboration, and training when using big data to move biomedical research forward.

Bourne’s talk was followed by a session on SRP applications of big data and data science, where six SRP grantees discussed their work related to data management and modeling, reporting exposure data to participants, and developing computational frameworks to better understand biological effects of exposures and susceptibility. 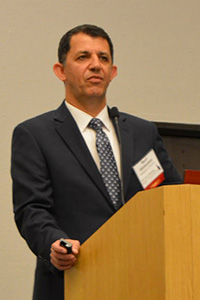 Emphasizing the importance of technology advances

Several scientific sessions featured grantees that are developing technologies and methods to detect and clean up environmental contaminants. They discussed ways to clean up heavy metals, like mercury, and chlorinated compounds, such as trichloroethylene, and how to move their methods into the field. Presentations on detection technologies included identifying contaminants in the environment, such as those in estuaries, as well as measuring biomarkers in humans, such as in blood.

Jeff Heimerman, associate director for the EPA Technology Innovation and Field Services Division, gave a talk on opportunities to support hazardous waste sites with science and technology advances. He discussed considerations that researchers should be aware of in applying their work to the field. According to Heimerman, roughly 51 percent of the U.S. population lives within three miles of a Superfund site, underlining the importance of research related to Superfund contaminants.

During the main meeting, speaker Rachel Morello-Frosch, Ph.D., professor at the University of California, Berkeley, discussed her work linking citizen science, or scientific research conducted in whole or part by amateur or nonprofessional scientists, and social equity to advance public health. She described her work with partners to develop the Environmental Justice Screening Method to examine cumulative impacts and social vulnerability within regions in California.

The scientific session that followed featured researchers who are working with communities affected by environmental exposures, such as asbestos, vapor intrusion, and arsenic. They described their work with community members to assess exposure to environmental contaminants, overcome barriers to testing, and identify health effects. 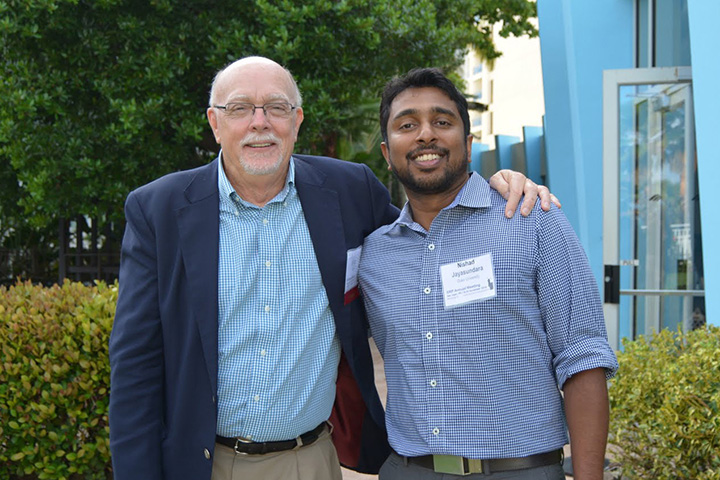 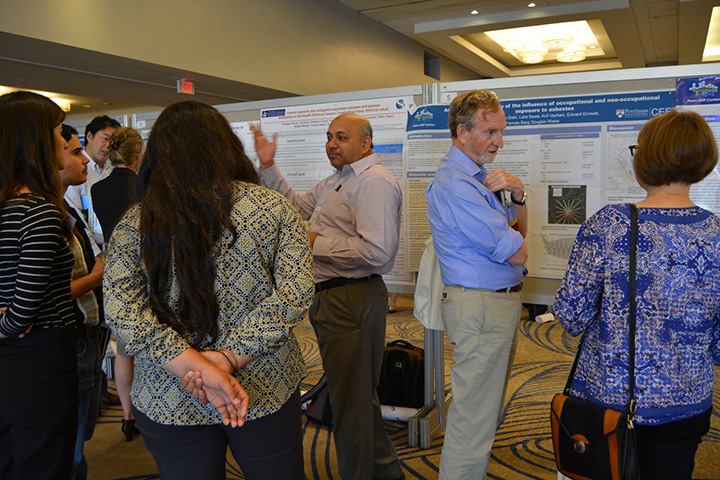 Two poster sessions were held after the scientific sessions. The posters exhibited work from grantees all over the country and highlighted collaboration.
(Photo courtesy of Northeastern University) 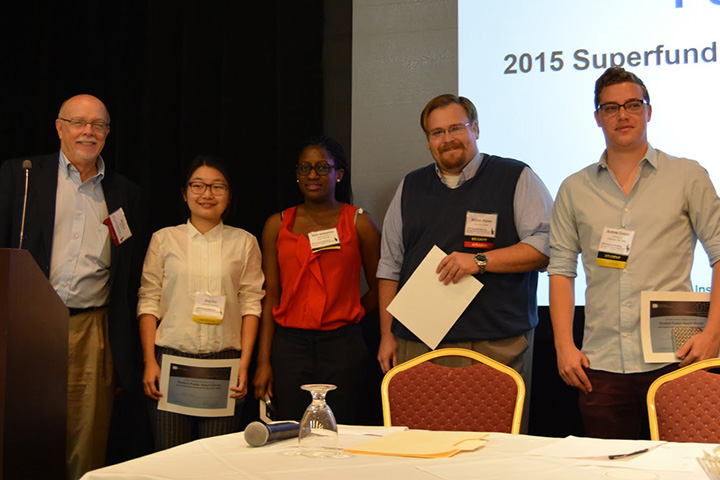 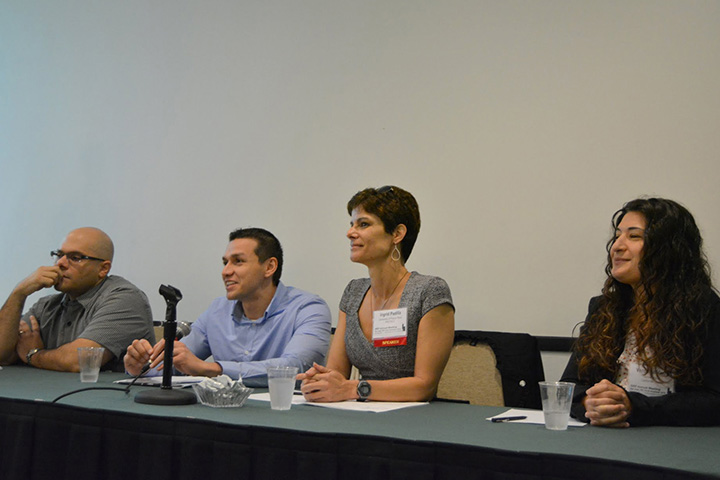 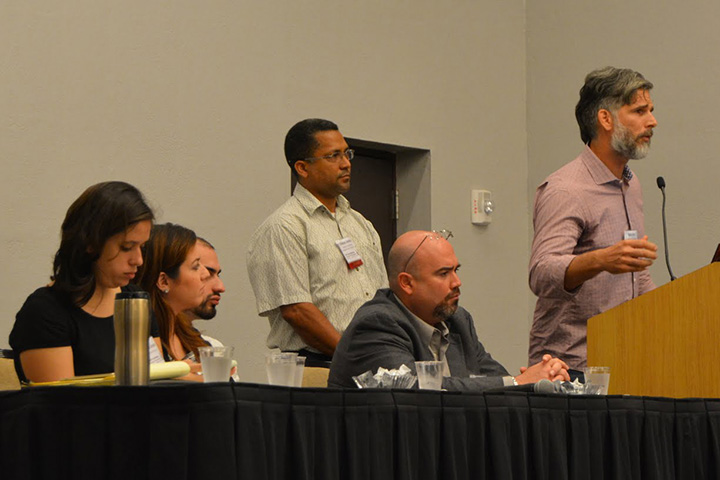 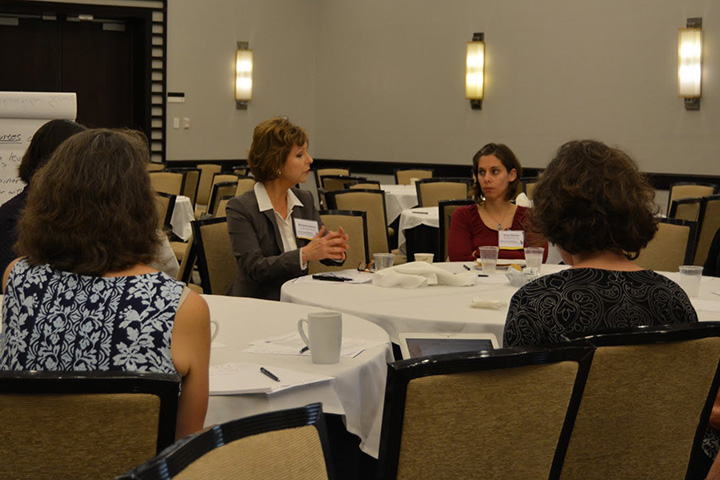 SRP Research Translation and Community Engagement Cores showcased successes from the year and identified ways centers could collaborate and learn from each other. During the session, participants broke into workgroups to address topics such as evaluating community outreach and research translation activities.
(Photo courtesy of Northeastern University)