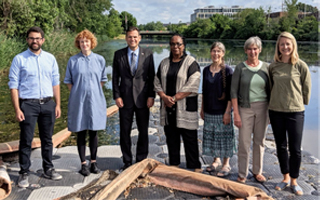 The Malden Works Team will create a public space along the Malden River in Massachusetts to improve community health and recreation opportunities with a $100,000 grant awarded by the Norman B. Leventhal City Prize. Led by NIEHS grantee Kathleen Vandiver, Ph.D., the team of environmental advocates, community leaders, and government officials will work with the Department of Public Works to revitalize a city-owned parcel of land along Malden’s industrial riverfront.

Manufacturing on the Malden River in the 1930’s contaminated river soils with waste from chemical factories, coal plants, and rubber manufacturing plants. Later, other manufacturers fenced off the river, blocking Malden residents’ access to their own natural resource.

“For so long, people didn’t even know that we [Malden] have a river,” said Malden’s Mayor and Malden Works ex officio member, Gary Christenson. “We have a real opportunity to do something special here. With the Leventhal City Prize, we have a path forward to not only redeveloping the site but doing so with all of our residents and business leaders involved.”

According to Vandiver, who directs the Community Engagement Core within the NIEHS-funded Massachusetts Institute of Technology Center for Environmental Health Sciences (CEHS), the project’s most ambitious goal is to broaden and diversify civic participation in community development. A steering committee of leaders from Malden’s diverse immigrant groups who are currently underrepresented in governance will guide the project and provide opportunities for community participation in decision making.

The project builds on six years of collaboration between the Malden community and CEHS’s Community Engagement Core. Most recently, Vandiver helped coordinate a human health risk assessment to address a long-held community concern about health risks associated with boating on the river. CEHS funded the lab analyses and collaborated with other organizations to produce the risk assessment report. The results showed that health risks for cancer are negligible for recreational boating on the river.

“In the absence of a rigorous health risk analysis, ‘stay away from the water’ has been the logical and appropriate precautionary advice given to the public in prior years. This report represents a breakthrough for the recreational use of the river for boating,” explained Vandiver at a televised meeting of Malden City Councilors in April 2019.

The risk assessment results played a key role in winning the Leventhal City Prize and gaining the city’s support to redevelop the site.

“We envision that the river will become a place where people can gather and walk, and really enjoy being out in nature and surroundings that are healthy,” said Vandiver.

The Norman B. Leventhal City Prize is a new interdisciplinary prize aimed at catalyzing innovative urban design and planning approaches worldwide to improve both the environment and quality of life. It was established in honor of Norman B. Leventhal, the visionary developer and philanthropist whose contributions transformed Boston’s urban landscape.