Lauren Petrick, Ph.D., identifies how molecular signatures in the body can tell a more complete story about prenatal and neonatal chemical exposures. She is an assistant professor in the department of environmental medicine and public health at the Icahn School of Medicine at Mount Sinai and a member of the Mount Sinai Institute for Exposomic Research and the Mount Sinai Transdisciplinary Center on Early Environmental Exposures, an NIEHS-funded Environmental Health Core Center.

Using dried blood spots collected at birth, which are blood samples that are blotted and dried on filter paper, Petrick and her research team use untargeted metabolomics to predict early-life exposures. Untargeted metabolomics casts a wide net to collect information on a vast number of metabolites in the body, which are influenced by both genetic and environmental factors. Instead of targeting a specific compound, she measures thousands of metabolites in a single analysis. By comparing samples collected at birth from healthy people to people who were later diagnosed with cancer or other diseases, she can identify metabolomic differences that may be associated with later-life diseases.

“Using these blood spots, we can go back in time to directly measure exposures at the time of birth,” said Petrick. “I may not have a specific hypothesis of what’s causing a disease, but I can measure as many metabolites as possible and look for metabolites that are statistically different between the cases and controls.”

“The Center has been a critical resource for consulting and collaboration,” Petrick said. “Senior Center members have provided me extraordinary support to seek funding that has advanced my independent research path.”

Petrick received two Center pilot project grants to initiate collaborations that enhance her metabolomics studies and obtain preliminary data to improve future research grant applications. Through her 2019 pilot project, she is using plasma from 171 girls in a previously established NIEHS funded cohort to identify metabolomic profiles associated with multiple endocrine disruptor exposure groups and puberty outcomes. As part of a pilot project awarded in 2018, she worked with colleagues to apply metabolomics methods to identify novel biological markers of exposure during pregnancy associated with postpartum depression. 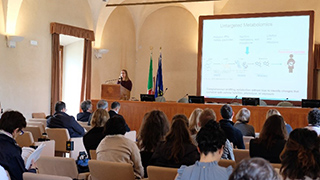 “One of the best aspects of the Core Center is pilot funding,” Petrick added. “The pre-review aspect has been particularly rewarding, where colleagues point out any details that are missing or areas that need clarifying, which really enhances the chances of a successful application.”

Petrick was one of 11 early-career researchers invited to share their work at the 2019 NIEHS Core Centers Annual Meeting. She presented results of her study in dried blood spots taken a few days after birth that linked the essential nutrient, linoleic acid, to increased risk of childhood leukemia. Because abundances of linoleic acid were greater in infants who were fed formula rather than breast milk in the first few days of life, the findings suggest that breastfeeding may be protective in reducing risk of childhood leukemia.

She is currently conducting follow-up studies to identify metabolomic differences between newborns who developed leukemia later in life and those who did not. She is performing untargeted metabolomics on dried blood spots from newborns, as well as blood collected from their mothers during pregnancy.

In addition to her work on dried blood spots, her involvement with the Mount Sinai-NIEHS Core Center has spurred a collaboration with Manish Arora, Ph.D., director of the Center’s Integrated Health Science Facility Core. Working with Arora, she is developing similar complementary untargeted metabolomics technologies in teeth. They aim to use these techniques to study teeth that children have shed to look back at exposures during development.