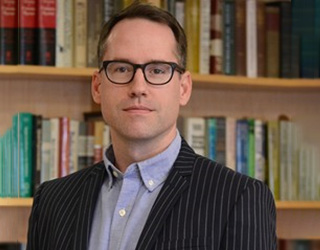 Pearson studies how pesticides and other environmental exposures may cause brain disorders.
(Photo courtesy of Columbia University’s Mailman School of Public Health)

Brandon Pearson, Ph.D., is an early-stage investigator interested in understanding the role of genetic, epigenetic, and environmental factors in brain disorders. According to Pearson, the Center for Environmental Health in Northern Manhattan (CEHNM) at Columbia University has played a key role in his use of “omics” approaches to understand how environmental exposures harm the brain.

Omics approaches use state-of-the-art technologies to detect, identify, and characterize different molecules in the body. Using transcriptomic approaches, which account for the activity of thousands of genes simultaneously, Pearson is testing hundreds of chemicals to identify those that affect the body through the same pathways and mechanisms that are associated with brain disorders. He found that mouse brain cell cultures exposed to a new class of high production volume fungicides produced gene expression profiles like those observed in humans with autism, Alzheimer’s disease, and other neurological disorders. These results may help researchers identify therapies to reduce the changes in gene expression that harm the developing and adult brain. 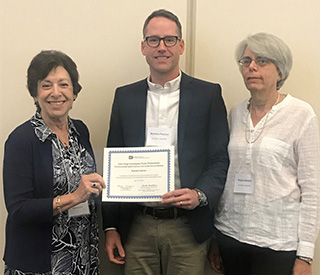 In 2018, Pearson received a Career Development Award from CEHNM, which provides him two years of financial support to help launch his research career. The award has allowed Pearson to continue refining cell and animal models to identify mechanisms of brain dysfunction and to use those results to infer which exposures may lead to those outcomes. He also is studying how non-chemical exposures, such as parental stress, work alongside chemical exposures to potentially increase the risk of neurodevelopmental disorders. “The Career Development Award has allowed me to continue my research and pursue ideas that I wouldn’t have otherwise had the opportunity to pursue,” he said.

According to Pearson, the mentorship and advice he receives from established CEHNM researchers has been a valuable resource as he advances toward an independent research career. For example, he regularly consults with Regina Santella, Ph.D., who directs the Center’s biomarkers laboratory. “Whenever I am trying a new test or technique, I always go to her for advice.”

The networking opportunities provided by the Center, such as meetings and seminars, have helped Pearson explore new avenues in his research. For example, at a CEHNM-hosted meeting, he connected with Alan Brown, M.D., who is leading a large birth cohort study in Finland examining how prenatal exposure to persistent organic pollutants may affect outcomes such as schizophrenia and autism. They are now using Pearson’s cell and animal models to better understand how high levels of DDE, a metabolite of the insecticide DDT, may lead to the neurological effects observed in the Finnish cohort.

Pearson is also passionate about ensuring that his research findings are translated in a way that will improve public health. “The Center facilitates building teams of scientists from various disciplines to study the clinical and public health relevance of discoveries we make in the lab,” he said. “Our goal is to translate findings from the lab into potential therapeutic and prevention strategies that can improve health.”