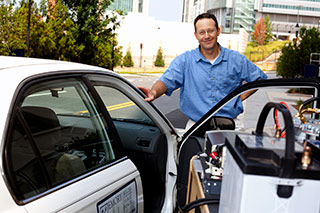 Sarnat used these air sample collection units in the Atlanta area during this study.
(Photo courtesy of Jeremy Sarnat)

Traffic-related air pollution (TRAP) is a mixture of potentially harmful compounds, and Emory HERCULES Exposome Research Center (ERC) researchers Jeremy Sarnat, Sc.D., and Donghai Liang, Ph.D., are working to determine what TRAP-compounds people are exposed to and the health effects that might occur as a result. Sarnat and Liang are identifying potential biomarkers of exposure and biological response by comparing tens of thousands of metabolites in samples from students living near heavy traffic to those living further away.

Metabolites, the chemical products of metabolism, are generated constantly by cells and internal processes as a natural part of body functions. They are also produced after exposure to chemicals from outside the body, like TRAP.

Led by Sarnat, the Dorm Room Inhalation to Vehicle Emission (DRIVE) study was an intensive 12-week project to measure air pollutants in the field and metabolites in biological samples from 54 students living in dorm rooms on the Georgia Institute of Technology campus. The researchers collected air samples inside dormitories, outside on campus, and by personal monitors. A major highway running through the heart of Atlanta was the main source of traffic pollutants. Using a high-resolution metabolomics platform coupled with an untargeted Metabolome-Wide Association Study (MWAS) approach, Sarnat and Liang scanned numerous metabolites in plasma and saliva collected from students living in dorms. Untargeted metabolomics casts a wide net to collect information on a vast number of metabolites without prior knowledge of what would be found. Researchers then have to chemically analyze the metabolites to identify them. 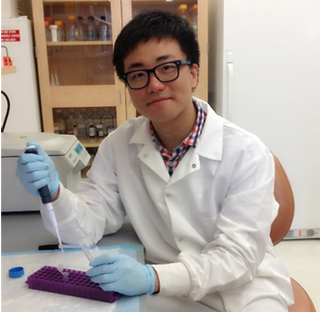 The research team identifiedmore than 20,000 metabolic features related to TRAP exposure in plasma, and about the same number in saliva. Of those, 1,291 unique metabolic features were associated with at least one air pollutant including black carbon, carbon monoxide, nitrogen oxides, and fine particulate matter. The amino acids arginine and histidine were the most strongly associated with air pollution exposure. In addition, some features offered clues about how students’ bodies were responding to the exposure – some metabolites were associated with oxidative stress, inflammation, and nucleic acid damage and repair pathways.

This project demonstrates how Sarnat and his team use the latest technologies like high-resolution untargeted metabolomics as powerful tools to identify new biomarkers of exposure and pathways of response. The HERCULES ERC is continuing to identify and characterize metabolites using cutting-edge technologies to characterize human exposures and links to health and disease.