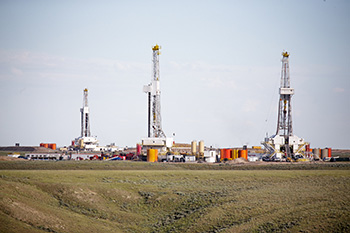 Maternal exposure to chemicals used in unconventional oil and gas (UOG) extraction, also known as fracking, affected immune system function in mice, according to a new study by NIEHS grantees from the University of Rochester Medical Center (URMC). Led by Paige Lawrence, Ph.D., director of the URMC Environmental Health Sciences Center, the study provides the first evidence that early-life exposure to a mixture of 23 commonly used UOG chemicals may hinder the ability to ward off diseases later in life.

“Our study reveals that there are links between early-life exposure to fracking-associated chemicals and damage to the immune system in mice,” said Lawrence in a URMC news story. “This discovery opens up new avenues of research to identify, and someday prevent, possible adverse health effects in people living near fracking sites.”

Fracking is a method where water, sand, and a mix of chemicals are forced into drilled wells, causing the shale to crack and release natural gas or oil for collection. To test the effects of fracking on the immune system, researchers added either the UOG mixture or a control substance without UOG chemicals to the drinking water of pregnant mice and then examined immune development and function in the offspring. Chemical concentrations in the water were equivalent to exposure estimates from levels detected in groundwater in UOG production regions. After the pups were born, the team analyzed outcomes related to infections, allergies, and autoimmune diseases.

The researchers reported that developmental exposure led to several changes in the cells of the immune system and affected the composition and function of T cells, which are essential to clearing infections, including many caused by viruses. These effects on T cells were more severe in female offspring. Additionally, developmental exposure to the UOG mixture accelerated and worsened autoimmune disease symptoms in female, but not male, offspring.

According to the authors, these results suggest that developmental exposure to UOG chemicals may lead to long-lasting changes in the mouse immune system, particularly in females, and more research is needed in order to better understand and reduce the potential risk of immune dysfunction in people living near UOG operations.

“Our goal is to figure out if these chemicals in our water impact human health,” said Lawrence, “But we first need to know what specific aspects of health to look at, so this was a good place to start.”

Formed in 2012, the Inter-Center Working Group on Unconventional Natural Gas Drilling Operations brought together 16 Core Centers that reviewed the potential public health impacts of UOG and made recommendations for future research.