Testing the Safety of Cinnamon Flavoring in E-Cigarettes 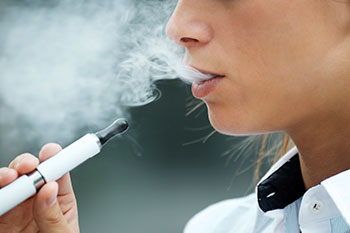 In a study done on the health effects of e-cigarette flavoring, researchers at the University of North Carolina at Chapel Hill (UNC) find that compounds that are safe to eat may have harmful effects on the lung’s defense system when inhaled.

Their study looked at the effects of cinnamaldehyde, the compound that gives cinnamon its flavor and odor. "The inhalation of flavoring agents poses a significant unknown in regards to the potential health risks of e-cigarette use," said Philip Clapp, Ph.D., in a press release. Clapp conducted the study as a doctoral student under the guidance of Ilona Jaspers, Ph.D., who leads the Cardiopulmonary Disease Research Focus Area within the UNC Center for Environmental Health and Susceptibility.

The researchers purchased an e-cigarette device at a local store and exposed human bronchial culture to cinnamon e-liquids and e-liquid vapors. They found that a single exposure slowed and even stopped movements of the cilia, which are hair-like structures on the surface of the cells that clear mucus and infectious organisms from the lungs. The lungs may be more prone to infection if cilia motion is impaired. Both the liquid and the vapor slowed cilia movement, and exposure to cinnamaldehyde alone had the same effect as exposure to the e-liquid mixture.

"Our finding that cinnamaldehyde impairs normal airway cilia motility is significant because it demonstrates that a common, food-safe flavoring agent, in the context of e-cigarette use, is capable of dysregulating a critical defense system in the lungs," explained Clapp.

Clapp and Jaspers decided to conduct the study because many food additives that are recognized as safe by the U.S. Food and Drug Administration have been added to e-cigarettes without further study of their effects when inhaled.

“E-cigarettes are widely believed to be less toxic than tobacco cigarettes, but there’s really no data out there that they are or are not – that’s just an assumption, a belief,” said Jaspers, in a New York Times article. “We need to go back and re-educate people that they may not be without harm.”

The study findings were presented at the international conference of the American Thoracic Society in San Diego, California, in May 2018.