Blount Studies Effects of Air Pollution on Tuberculosis in Vietnam Blount studies the effects of air pollution on tuberculosis.
(Photo courtesy of EHSRC)

Robert Blount, M.D., a physician scientist at the University of Iowa Environmental Health Sciences Research Center (EHSRC), studies how exposure to air pollution affects tuberculosis risk and the body’s immune response to the lung infection. His research suggests that people with tuberculosis are susceptible to the adverse health effects of traffic-related air pollution.

“Tuberculosis is a contagious disease caused by bacteria which attack the lungs. If a person’s immune system is weakened, they are less able to defend the body against a tuberculosis infection,” said Blount.

With support from a 2018 pilot project grant from the Center, Blount is examining how exposure to particulate matter (PM) air pollution affects tuberculosis risk and lung immune response in children living in Hanoi, Vietnam. According to Blount, he selected Hanoi as his study site because it has both high levels of PM and a high burden of tuberculosis. With additional funding from NIEHS through a career development award, Blount worked with the Vietnam National Tuberculosis Program to enroll 300 Vietnamese children living with an adult diagnosed with tuberculosis in the study. He will test the children for tuberculosis four times over the course of a year and use personal monitoring methods to assess their PM exposure. He is also collecting air filter samples in Vietnam, which he will bring back to analyze using EHRSC core facilities. 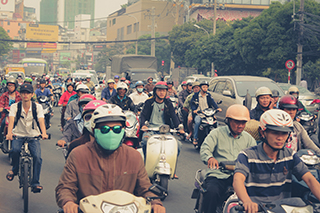 Emissions from motorbikes are a major contributor to air pollution in Vietnam.

Working with Center Director Peter Thorne, Ph.D., who also leads the EHRSC Pulmonary Toxicology Facility, Blount is identifying specific particles and chemicals in the air filter samples that may weaken the immune system. He is also collaborating with the Clinical Director of the Center’s Integrative Health Sciences Facility, Alejandro Comellas, M.D., to examine how PM composition affects the ability of respiratory cells to defend against the bacteria that cause tuberculosis. “This work is exciting because not much is known about early immune responses in the lungs to tuberculosis and how exposure to air pollution could inhibit that,” said Blount. “Our findings could lead to a better understanding of how air pollution affects the lung’s immune response to other viral infections as well.” 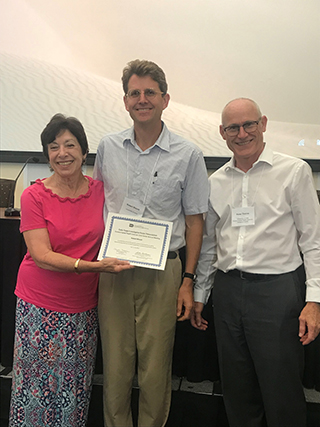 According to Blount, working with established researchers at the Center has been particularly helpful. “The collaborative environment and having access to all of these various experts in one Center has been invaluable to help me answer complex research questions and understand the cellular mechanisms of the immunologic response to air pollution,” he explained.

As part of the EHSRC Career Development Program, Blount works with a mentoring committee, has regular reviews of his career development plan, and receives a financial stipend. In addition, he was sponsored by the Center to present his research at the 2018 Environmental Health Sciences (EHS) Core Centers Annual Meeting in Davis, California. Blount says he received valuable feedback about the direction of his project during the meeting. “I was able to hear some great ideas from a variety of researchers on how to move my project forward.”