The Preferences pane was changed slightly to eliminate some problems that could occur in the previous build. The new pane looks as follows: 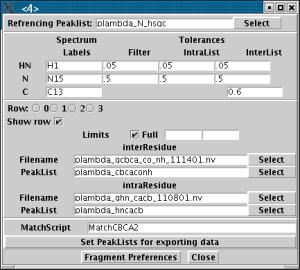 The topmost section now contains an option to choose a peaklist. The peaklist chosen is used as the reference when rendering the spectral windows under ‘Examine Peaks’ and the list used to filter against in ‘Filter Peaks’. The rest is left unchanged other than the MatchLists entry box, which has been removed. A procedure now checks for the lists selected as inter- and intra-residue in all active rows and uses them as the match script’s arguments.

The button 'Set Peaklists for exporting data' is used to set the peaklists that correspond to hncacb, or cbcaconh, etc. This allows the data to be exported properly to PACES or other programs. It also enables the program to generate an initial guess as to the designation of each peak.

It is very important that a referencing peaklist is selected before any of the steps are attempted. The frames are rendered incorrectly when this option is left blank, which requires a restart of NMRView to fix.