The control window of the Edit Clusters step has undergone significant changes in an attempt to make it more flexible for the user. The first thing to notice is the changeable cluster number for both the left and right boxes. Any cluster can be selected in order to move peaks between them. Also, the peaks must be moved with either of the arrow buttons, not automatically as was the case previously. 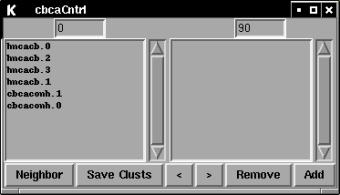 The two buttons ‘remove’ and ‘add’ do what would be expected of them, when ‘add’ is pressed a new window is opened with options to specify which peak should be added to the cluster.

When any changes are made to clusters the ‘save clusts’ button must be pressed before moving on to another cluster, otherwise all the changes will be forgotten.