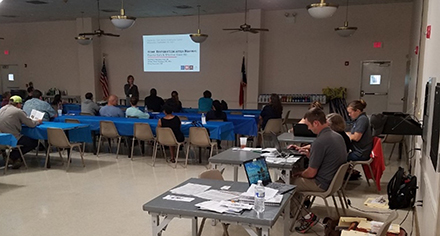 The research team provides information to study participants at the Highlands Community Center during a wristband deployment event Sept 19, 2017, held while many areas of Houston were still flooded. (Photo courtesy of Kim Anderson)

Human exposure to harmful chemicals is potentially higher in the wake of natural disasters, according to a new study from NIEHS-funded researchers. Led by Kim Anderson, Ph.D., from Oregon State University, the team used common silicone wristbands to measure Houston residents’ chemical exposures during and after Hurricane Harvey, which hit the Gulf coast of Texas in August 2017.

Natural disasters like hurricanes are gaining in frequency and strength around the world. In addition to injuries and illness, affected communities may also become exposed to hazardous substances in the aftermath of a disaster. For researchers, emergency responders, and policymakers to protect public health, it is important to understand how disasters may change people’s exposure to potentially harmful chemicals.

“When there’s a disaster in a major industrial center, it presents its own unique potential for chemical exposures,” Anderson explained. It is crucial to know, she stressed, which chemicals a disaster has released and in what quantities. To gather these data, she and her team of Oregon State University and Baylor College of Medicine researchers used silicone wristbands – the same kind distributed to promote causes and advertise companies.

With funding from NIEHS, Anderson developed the silicone wristband technique nearly a decade ago. Silicone absorbs chemicals the same way skin and lung tissue do, making it a useful substitute for direct tissue sampling. The bands become a tool for measuring any chemicals a wearer encounters.

Anderson realized these easy-to-wear wristbands would be ideal for gathering chemical exposure data during and after natural disasters. Importantly, the wristbands would not be too burdensome for people already stressed by a disaster compared to other methods, such as tissue sampling or wearing a larger sampling device.

For the Hurricane Harvey study, Anderson and her team recruited study participants to wear and return wristbands immediately after the hurricane and one year later. The month following the hurricane, 172 participants wore a wristband for one week, then returned it. One year later, 239 people wore and returned wristbands. Within those groups, 99 people participated both years and allowed Anderson’s team to gather longitudinal data.

The researchers used gas chromatography and mass spectroscopy to look for about 1,500 different volatile organic chemicals (VOCs) and 63 polycyclic aromatic hydrocarbons (PAH), byproducts of burning oil, coal, or wood, and of the oil refining process.

Chemical exposure levels found in the wristbands were generally higher immediately following Hurricane Harvey, compared to the one-year follow-up. Some of the chemicals detected, such as PAHs, have been linked to increased cancer risks.

“We saw flame retardant levels were much higher during the disaster and cleanup,” Anderson said. “This is probably from people ripping out carpets and dealing with destroyed furniture – there are a lot of flame retardants in those things.”

In the VOCs screen, the team detected 188 chemicals and found 29 of those in at least 30% of the study population. Of those 29 common chemicals, 23 were found in significantly higher levels post-Hurricane Harvey compared to a year later.

Additionally, the researchers detected 51 PAHs, with 31 appearing in at least 30% of the population and 12 of those in higher concentration following the hurricane compared to the follow-up.

NIH established the Disaster Response Research (DR2) program in 2014 to respond to the growing need for research into how disasters and public health emergencies affect human health. The program provides funding, training, and an array of resources for researchers to use in their work. One example is the DR2 Resources Portal, a repository of tools and resources for data collection in disasters and public health emergencies.

DR2 also offers human studies and research ethics guidance, including the National Institutional Review Board (IRB) Preparedness Program, to assist researchers in getting IRB approval for studies more quickly so they can gather timely data from disasters and emergencies. Another available tool, the Rapid Acquisition of Pre- and Post-Incident Disaster Data (RAPIDD), is a study protocol template with standardized methodology and surveys for researchers to adapt for their disaster research.

One complication Anderson and her team encountered was the need for baseline levels of the chemicals, or the usual exposures people experience in a non-disaster scenario. Since natural disasters strike with little warning, it is not always possible to test for background chemicals before a hurricane hits.

By repeating their sampling one year after Hurricane Harvey, the researchers were able to use that data as an analog for baseline, pre-disaster conditions. A year later, much of the storm damage had been cleaned up and local industry was operating at 90% of normal capacity. Since life in Houston was returning to normal, the team determined the chemical levels detected would be similar to levels before the hurricane.

“I wanted to show we could go back into a community in the same time period, same season, same month and get what I call an ‘estimated baseline,’” Anderson noted.

Anderson believes this study demonstrates the possibility of using passive sampling devices like silicone wristbands to measure personal chemical exposures during disasters. She hopes the study will highlight the need for scientific infrastructure, networks, and partnerships for disaster response research before disasters strike.

As she says, “You have to create the fire department before the fire.”