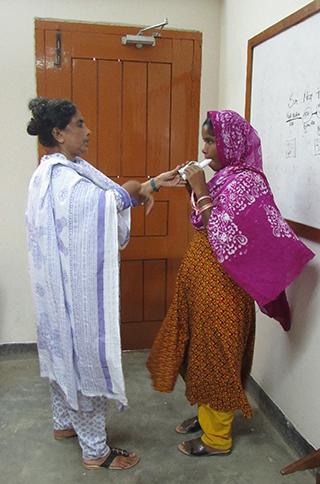 Seven international collaborations have received awards from the Global Environmental and Occupational Health (GEOHealth) program, led by the Fogarty International Center (FIC), in partnership with NIEHS, the National Cancer Institute, the National Institute on Aging, and the Office of Research on Women’s Health. The GEOHealth program supports the development of regional centers, or hubs, that foster research and training to alleviate pressing environmental and occupational health problems in low- and middle-income countries.

Unhealthy living and working conditions are responsible for nearly a quarter of global deaths, most of which occur in low- and middle-income countries, according to the World Health Organization.

“Many of those countries lack resources to study the health effects of local environmental and occupational hazards, such as air pollution or pesticide exposure,” said Christine Jessup, Ph.D., GEOHealth program officer for FIC. “The goal of the program is to build and support research collaborations in low-resource nations so that they can produce locally relevant scientific evidence needed to inform policies and to improve health.”

At the heart of each hub is a border-spanning partnership: An academic institution in a low- or middle-income country oversees research projects, and a U.S.-based university coordinates related research training.

“Training can occur at either location,” explained Mike Humble, Ph.D., GEOHealth program officer for NIEHS. “The program aims to equip young scientists with the skills needed to perform research related to the public health needs in their region. We hope the training and research will lead to sustainable efforts and impact beyond the award period.” 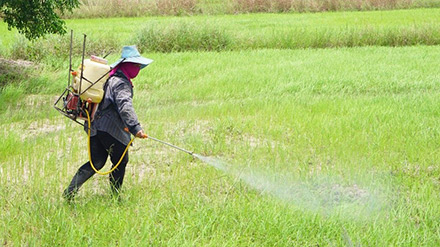 The GEOHealth program launched in 2012, evolving from an earlier initiative pioneered by FIC, NIEHS, and the National Institute for Occupational Safety and Health. Planning grants funded hubs for two years for the purposes of building collaborations and identifying priority needs.

In 2015, seven hubs received the first round of five-year grants. At least 168 research trainees have been involved with the program, based on recent progress reports, and teams have published over 145 papers, according to Jessup.

“One of the most rewarding aspects of our GEOHealth work has been the impact on the debate in Thailand over banning harmful pesticides,” wrote members of the Southeast Asia GEOHealth Hub, which studied certain health effects of pesticide exposure, in 2020.

“It’s exciting to see that project move forward,” Jessup said. “There is a huge need to collect, synthesize, and efficiently process epidemiological data on a local and regional level to address environmental health challenges.”

One hallmark of the GEOHealth program is its built-in scientific network, according to Jessup.

“At past network meetings, trainees had opportunities to present their research. Their mentors and colleagues took pictures of them, capturing that proud moment of their first presentation at the NIH,” he recalled. “Trainees are also good about talking to each other during the network meetings. Those simple types of interactions really help build the global health network that we envisioned.”