Microplastics May Increase Risk for Obesity 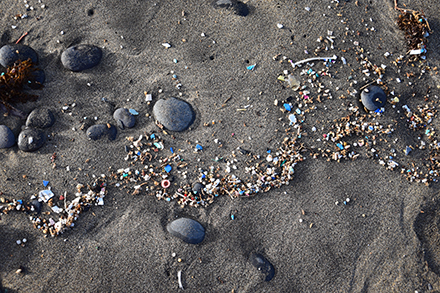 Each year, around 8 million metric tons of plastic are dumped into the ocean.

Microplastics are everywhere. They can even be found in our bodies. These extremely small pieces of plastic debris in the environment result from the disposal and breakdown of consumer products and industrial waste.

And now, according to a study funded by NIEHS, human exposure to microplastics and plastic additives – chemicals such as heat and UV stabilizers, plasticizers, and flame retardants added to improve certain properties of plastics – may be linked to an increased risk for obesity by affecting metabolism and promoting the growth of fat cells.

“Plastics production and usage has grown considerably over the past five decades,” said Kurunthachalam Kannan, Ph.D., lead author and professor in the Department of Pediatrics at the New York University Grossman School of Medicine. “This coincides with the rise in overweight and obesity rates in a global context. While there are several factors, including a lack of physical activity, to consider in the obesity pandemic, there is evidence that caloric intake has not significantly changed in the last decades, leading to the conclusion that plastics can be playing a significant role.”

The Pervasive Nature of Microplastics

Plastic waste has increased exponentially in the previous decades. Through weathering, a process including erosion, abrasion, oxidation, and decomposition, these plastics break down in the environment into microplastics – any plastic particles smaller than 5 millimeters in size.

The publication cites that in the European Union alone, an estimated 75,000 – 300,000 tons of microplastics are created each year. Further, estimates suggest that microplastics could make up 13.2% of the total weight of plastics in the world by 2060. Degradation of larger plastics are the source of most common microplastics. Additional types of microplastics come from microfibers or synthetic textiles, plastic fragments and pellets, as well as microbeads used in cleaning and cosmetic products.

“Microplastic exposure in people is ubiquitous,” said Kannan. “Almost everybody is exposed to microplastics on a daily basis, and therefore, it is a global public health problem.”

“An average person is exposed to a few to several milligrams of microplastics daily,” said Kannan. “When you compare this exposure to other environmental chemicals, which is usually in nanograms or micrograms daily, microplastics exposure is huge, and it is a cause for concern.”

The publication cites that based on the current information, the most common sources of microplastics exposure are inhaled indoor air and dust, drinking water and packaged beverages, contaminated foods, and cosmetics and textiles. Notably, plastic-bottled water consumption is currently the second-greatest source of exposure to microplastics globally, according to the publication.

Microplastic contamination in seafood and sea salt has been known however, additional exposures from other foods and plastic food packaging have not been studied. The authors note that one of its limitations is quantifying microplastics exposures in food due to a lack of standard and validated analytical methods.

Health Effects of Exposure to Microplastics

While the health risks of microplastics in humans are not fully understood, laboratory animal and cell culture studies suggest that these chemicals can encourage obesity through several mechanisms.

Microplastics fewer than 20 micrometers that penetrate the cell membrane can cause an immune response and potentially cell damage. Microplastics induce oxidative stress and alter energy and fatty acid metabolism. Accumulation of microplastics in the liver and kidney has also been shown to boost the growth and accumulation of fat cells and disrupt energy balance, which ultimately can affect body weight.

In addition, plastic additives can contain harmful chemicals, which can act as co-contaminants in microplastics. Many of these plastic additives, including organotins, phthalates, bisphenols, and toxic metals, affect fat cell growth as well as the proteins that regulate lipid and glucose metabolism. Bisphenol A (BPA), commonly used to make certain types of plastics, is known to affect the endocrine system and the body’s hormonal balance, which can impact metabolism and weight gain.

Overweight and obesity are a growing concern worldwide as they increase the risks of health issues, such as diabetes, cardiovascular disease, hypertension, and certain types of cancer. The World Health Organization estimates that obesity has nearly tripled since 1975. While obesity has increased, so has exposure to microplastics and plastic additives, suggesting an association between the two.

Kannan says there is more to learn about the toxic effects of microplastics in humans, and how specific factors, such as type, size, and concentrations of microplastics affect the metabolic pathways that could lead to increased body weight gain.

“The first major knowledge gap is in understanding the magnitude of exposure,” said Kannan. “There is still a lot to be done in understanding the sources and pathways of exposure to microplastics; for instance, exposure doses through food and food-packaging are still not fully known. We need to develop methods to quantify the exposures comprehensively and holistically.”

NIEHS and the National Science Foundation jointly fund research on marine-related health issues through the Centers for Oceans and Human Health. These centers research microplastics as an emerging contaminant of concern. Mark Hahn, Ph.D., senior scientist and chair of the biology department at Woods Hole Oceanographic Institution, a participating center, shared how microplastics impact human health and marine ecosystems.

The NIEHS Consortium Linking Academic and Regulatory Insights on BPA Toxicity (CLARITY-BPA) program studies the potential health effects from exposure to BPA. The program published  a report in 2021 highlighting their findings. In addition, NIEHS works closely with the National Toxicology Program (NTP) to determine the toxicity of plastic additives. NTP scientists also participated in an NIEHS and National Academies of Science, Engineering, and Medicine workshop to discuss research needs to better understand the health effects of microplastics and plastic additives.