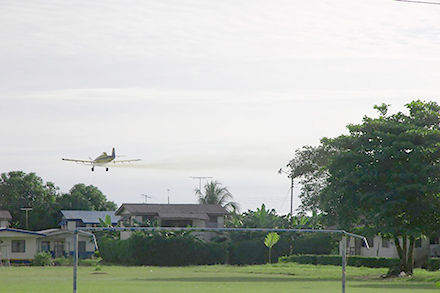 An international group of researchers has made inroads in evaluating pesticide-related health risks in mothers and infants living in banana-growing areas in Costa Rica. Their work is part of the Infants’ Environmental Health (Infantes y Salud Ambiental (ISA)) study, funded in part by NIEHS and coordinated by the Central American Institute for Studies on Toxic Substances at Universidad Nacional in Costa Rica. It is one of the first comprehensive examinations conducted in Central America on the human health effects of pesticide exposure on populations at greater risk of associated health impacts.

The team’s latest research, published in Science of the Total Environment in March 2022, focused on pesticides and thyroid function in pregnant women.

“This is one of the first studies among pregnant women to evaluate the effects of pesticides and metals on the thyroid function,” said van Wendel de Joode. “This is an important study not only to better understand the health of mothers, but also of their offspring, in populations living in a vulnerable context.”

The researchers found that pesticide exposure during pregnancy can lead to thyroid hormonal imbalance, which can result in under-activation and over-activation of the gland, known as hypo- and hyperthyroidism, respectively.

“The thyroid gland regulates the way our body uses energy,” said van Wendel de Joode. “It influences many systems and functions in our body. The hormone that stimulates the thyroid, the TSH, is regulated by free thyroxine (FT4) and free triiodothyronine (FT3). If the production of one hormone gets too high, it can limit the production of the other.”

As one function, the thyroid gland plays a critical role in producing hormones necessary for fetal development. To study this role, the researchers surveyed 400 women who were each under 33 weeks pregnant. Among the participants, 8% worked in agriculture, and 60% lived with partners who work in agriculture. Further, 26% lived fewer than 50 meters from the banana plantations. The women provided bodily samples to determine levels of thyroid hormones, pesticide substances, and manganese.

The researchers focused on pesticides commonly used in banana production in Costa Rica. The fungicide mancozeb contains the substance called ethylene thiourea (ETU), which is suspected to produce thyroid toxicity. The fungicide also contains manganese, which can additionally be found in drinking water thought to be contaminated by both natural and endemic sources, such as mancozeb. In excess, the metal may be toxic. In addition, chlorpyrifos, an organophosphate insecticide, can elicit a toxic effect. The study explored how exposure to these pesticides and metals can influence thyroid function in different ways.

“The production of FT4 is not only important for the women themselves, but also very important for fetal growth and development,” said van Wendel de Joode. “Low levels of this hormone could also affect the fetus. It is still not well known if even slight changes in hormone levels, like FT4, might affect development.”

The researchers used statistical analysis to evaluate the additive effect of pesticides as well as to explore exposure response relationships. They found that fungicides did not influence TSH and FT3; however, women with higher ETU had lower FT4.

Conversely, elevated manganese concentrations from blood samples and higher levels of exposure to chlorpyrifos were associated with increased FT4. The researchers measured for additional chemical substances found in other pesticides, including hydroxypyrimethanil and hydroxythiabendazole in urine samples. They also tested levels of lead in blood samples.

Pesticide Use and Human Health

Agriculture remains an important sector in Latin America and the Caribbean (LAC). According to a World Bank report, LAC agriculture uses over one-third of the region’s land area and is the world’s largest net exporter of food. Global agricultural demand on the area has driven proliferative application of herbicides and pesticides, which today accounts for 20% of the global agrochemical use.

Those herbicides and pesticides are designed to protect crops and combat pests; however, they can contain toxic chemicals that can be harmful to the health of exposed workers. In Costa Rica, the fungicide mancozeb, among other pesticides, are often aerially sprayed on banana plantations. In addition, insecticides, such as chlorpyrifos, are used in bags to protect the fruit. Fungicides, such as thiabendazole and imazilil, are used in the packaging process before shipment.

“There is a lot of control over pesticide levels in the banana for consumption,” said van Wendel de Joode. “But there is less attention on the conditions of how and by whom these bananas are being produced.”

Toxic exposure to pesticides can result in short- and long-term health effects. Immediate effects can include nose and throat irritation, nausea, and dizziness, while prolonged effects can result in conditions such as asthma, certain types of cancers, cognitive impairment, as well as reproductive health problems.

While the toxicity and health risks of dermal exposure to these pesticides are well observed in mostly male occupational workers, understanding their effects on women and children has not been largely studied. The ISA study provides insights on these groups.

In addition to studying thyroid function in pregnant women, the researchers are examining the role of pesticides and environmental exposures on respiratory and allergic outcomes in both young children and nonpregnant women.

Globally, children under the age of five are at a high risk of mortality from lower respiratory tract infections (LRTI). In addition, the prevalence of asthma has been increasing in low-resource settings. Therefore, the ISA study team assessed if there were potential associations with pesticide exposure. They found that high exposures to the insecticide pyrethroid increased the odds of wheezing, asthma, and LRTI. Pyrethroids are insecticides widely used in the home environment to combat mosquitos and other insects. Other common pesticides did not show a statistically significant relationship.

Women in tropical and agricultural environments can encounter a variety of environmental exposures. The researchers sought to better understand their exposure to pesticides used in the home as well as to smoke from waste burning. They found that both exposure pathways increased the risks of asthma.

The ISA study will continue to examine the health outcomes of women and children as well as prepare to evaluate other environmental exposures, such as air quality. In addition, the study is committed to a holistic approach that combines community-based research with local outreach, awareness, and engagement activities.

“These populations live in an environment with many stressors,” said van Wendel de Joode.” “They are not only chemical, but also social and economic. There are all kinds of environmental challenges. We hope we can address these in the future through more work on how to mitigate their impact.”