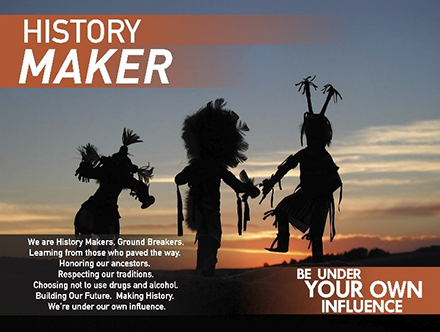 Linda Stanley, Ph.D., participates in the Be Under Your Own Influence (BUYOI) campaign. BUYOI is a media-based substance use prevention program developed for adolescent populations. The project is funded by the National Institute on Drug Abuse through the Intervention Research to Improve Native American Health program. (Photo courtesy of Linda Stanley)

Indigenous communities in the U.S. face significant health disparities. These health disparities, including lower life expectancy and a disproportionate disease burden, are interrelated to unique social and economic challenges.

Research-guided and community-based strategies that address these inequities should be part of the solution to reduce health disparities in Indigenous communities, according to a publication funded by NIEHS and the National Institute on Drug Abuse (NIDA).

Indigenous communities in the U.S., represented by American Indian, Alaska Native, and Native Hawaiian populations, have experienced persistent health disparities that have worsened in the last decade. The Indian Health Service (IHS) notes prominent disparities in diabetes, unintentional injuries, assault or homicide, intentional self-harm or suicide, and chronic lower respiratory diseases. These disparities have endured, in part, due to “inadequate education, disproportionate poverty, discrimination in the delivery of health services, and cultural differences,” according to the IHS.

To begin to combat these health and socioeconomic disparities, the researchers found public health initiatives that combine intervention research, the process of studying the health promotion, prevention, and treatment of an intervention, with Indigenous people’s wisdom, knowledge, and tradition can improve Indigenous health outcomes.

“To implement an effective public health intervention, it first needs to be tested,” said Stanley. “We believe that evidenced-based interventions that are adapted to Indigenous strengths can lead to positive health outcomes; however, this research is limited as it relates to Indigenous communities. We are doing intervention research in a way that respects native knowledge and culture and recognizes how a history of loss and trauma has contributed to the inequities of today.”

The publication details how these disparities have contributed to health-related economic, social, and developmental costs borne by Indigenous communities. The researchers extrapolated data from past studies to estimate the direct medical care costs and indirect costs (those associated with loss of productivity and value of life) borne by certain Indigenous populations. They calculated annual direct costs are approximately $6.6 billion and indirect costs are as high as $33.2 billion. Further, when accounting for substance use and mental health treatment, an additional $531 million in direct and up to $2.7 billion in indirect costs are added.

The significant economic burden does not fully articulate adverse experience, trauma, and loss that is unique to Indigenous populations. The publication notes how recurrent exposure to trauma and loss contributes to physical and mental health diseases and disorders, including substance use disorder. In addition, Indigenous children are more likely to suffer from adverse childhood experiences and ethnic discrimination, which can cause chronic social stress.

Taken together, the researchers explain that these distinctive economic, social, and developmental costs can hinder the effectiveness of conventional public health interventions. In addition, unique Indigenous factors, such as traditional views of health and healing, history of disempowerment, Tribal governance structure, and diversity among Indigenous populations, can impact the effectiveness of existing interventions.

“As researchers, we like to generalize populations,” said Stanley. “While Indigenous groups share some similarities in terms of culture, they also have many differences because their way of life varied based on location. It is important to recognize their unique values, family structures, and cultures while working within these communities.”

The publication explains how factors, such as diversity among Indigenous populations, should be understood to inform valuable evidence-based interventions. In terms of historical and cultural uniqueness, many Indigenous communities report lower levels of trust with medical care systems as well as have a different conception of health, illness, and spirituality.

While the publication presents potential considerations to improve Indigenous health outcomes, it also notes significant research gaps in intervention science among Indigenous groups. To help address those research needs, the National Institutes of Health (NIH) leads the Intervention Research to Improve Native American Health program, of which NIEHS is a participant. This program develops, adapts, and tests the effectiveness of health-promotion and disease-prevention interventions in Indigenous populations. For example, Stanley and a team of researchers are evaluating the effectiveness of a substance use prevention program in middle schools.