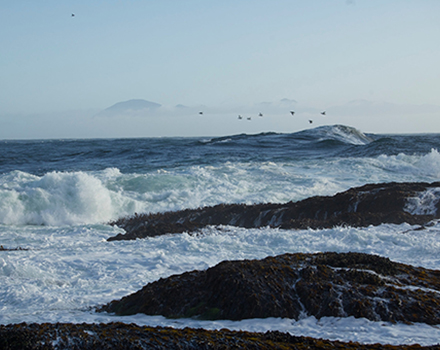 Over a third of the total human population lives within 60 miles of an oceanic coast. Human health is deeply intertwined with ocean health. (Photo courtesy of Dr. Sophie McCoy, Florida State University)

“The connection among ocean pollution, climate change, and human health are global problems, which scientists are only beginning to understand,” said NIEHS OHH Program Director Anika Dzierlenga, Ph.D., who presented the program concept to the council. “Program grantees are examining how climate change or different climate variables may alter toxicity or exposure levels of ocean pollution and toxins.”

NIEHS and National Science Foundation (NSF) have jointly supported the OHH program since 2004. The partnership funds both individual research projects and interdisciplinary Centers for Oceans and Human Health.

A review paper published in the journal Annals of Global Health, which is paraphrased in this article, describes the many ways oceans affect human health and how these existing exposures will spread geographically as they are exacerbated by climate change.

Certain species of marine and freshwater algae produce toxins that are harmful to humans. Warming and over-nutrified bodies of water create favorable conditions for a large growth spurt of toxic algae, an event called a harmful algal boom (HAB). People exposed to algal toxins through inhalation, swimming, or by consuming HAB-contaminated fish and shellfish are at risk for a suite of health outcomes.

Other marine microbes can cause disease and health problems when ingested through contaminated seafood or drinking water. Increased precipitation and warming waters influence the geographic distribution of these marine microbes, leaving more people vulnerable to exposure.

Millions of tons of plastic waste enter the oceans each year. These plastics break down into tiny particles called microplastics, which adsorb chemicals from the marine environment. Microplastics are ingested by fish and shellfish and then passed on to humans through seafood consumption. The risks to human health from microplastics are still largely unknown and present an opportunity for further research for OHH grantees.

Chemicals and heavy metals, such as pesticides and mercury, reach the ocean as run-off from land-based activities such as farming or manufacturing. Contaminated seafood consumed by humans can cause a wide variety of health effects, including cardiovascular disease, developmental and neurobehavioral disorders, metabolic disease, immune dysfunction, endocrine disruption, and cancers.

Climate change affects oceans through warming, acidification, and an increase in extreme weather events, as detailed in the review paper. These changes in ocean properties interact with existing exposures to increase risk to human well-being. Warming waters can increase the geographic range and seasonality of marine pathogens and HABs. Higher temperatures and acidic water conditions can increase the toxicity of chemical or natural toxins. Extreme weather events, such as hurricanes and floods, can increase levels of chemical and plastic pollution transferring from land into the sea.

“People rely on oceans and lakes for the economy, their way of living, tourism and recreation, and food,” explained Dzierlenga. Importantly, the oceans themselves hold possibilities for curtailing climate change. “Understanding how to take better care of the oceans will help define our future.”

NIEHS and the National Science Foundation (NSF) fund four Centers for Oceans and Human Health, each focusing on issues of concern to their region.

A key component of the program is the Centers for Oceans and Human Health, which supports interdisciplinary research collaborations to further investigate the impact of marine and Great Lakes exposures on human health.

In the nearly two decades since being established, OHH centers have made valuable contributions to the research on marine toxins, ocean pollution, and HABs. OHH center scientists have identified critical windows of exposure for the neurotoxin domoic acid, a naturally occurring algal toxin. Researchers have shown that human consumption of contaminated fish reduces the effectiveness of the body’s natural systems and can contribute to disease. Findings on the dynamics of HAB events have aided in the development of forecasting models to help predict and detect when and where blooms initiate.

“It is rare to have the degree of interdisciplinary research teams that defines OHH,” said Dzierlenga. “At the OHH centers, there are oceanographers, human health researchers, and community partners working together on the same ocean-related exposure in real time.”

Moving forward, the renewed program will continue this critical work while exploring new research questions. For example, researchers will examine human exposure levels to HABs and other natural marine toxins, how co-exposure to marine toxins affects health, and how microplastic exposure affects marine and human health.

Community engagement has been central to the OHH program. Each center, listed in the sidebar, has made a point to partner with community groups and residents to better strategize ways to adapt, prevent, and protect against exposures of concern for the local populations they work with. 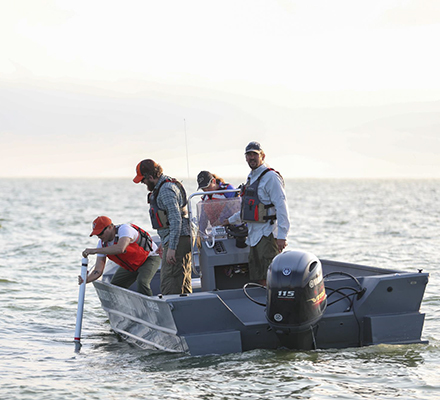 “Communication between researchers and communities is critical to the OHH mission,” said Dzierlenga. “It is vital to bring scientific discoveries back into the community being impacted and help address their needs while also using community input to establish priorities.”

The Great Lakes Center for Fresh Waters and Human Health partners with charter boat captains, the U.S. Coast Guard, and researchers at local schools to collect water samples on Lake Erie. This collaborative effort has been instrumental in providing real-time data to scientists attempting to monitor HABs and to create forecast models for their occurrence.

At the Greater Caribbean Center for Ciguatera Research (GCCCR), scientists are reaching out to healthcare professionals to improve awareness of tropical fish poisoning. Because climate change is warming water temperatures, more tropical species are migrating farther north, which is leading to new populations exposed to illnesses previously seen mainly in the tropics. GCCCR is engaging with the medical community and poison control centers to educate doctors in order to improve diagnosis and treatment of these health conditions.

The NIEHS Center for Oceans and Human Health and Climate Change Interactions at the University of South Carolina works with the South Carolina Department of Health and Environmental Control to aid in water sampling at beaches throughout the state and release swim advisories if bacterial counts reach levels that constitute a health risk.

The Woods Hole Center for Oceans and Human Health developed an open-source, online data portal for real-time sharing and visualization of harmful algal bloom observations, sensor data, and forecast models. This portal can be used by researchers, managers, the shellfish industry, and the public to track different HAB species over time and make informed decisions regarding risk exposure.