For Insight Into Cookstove Use, Researchers Turn to Behavioral Science 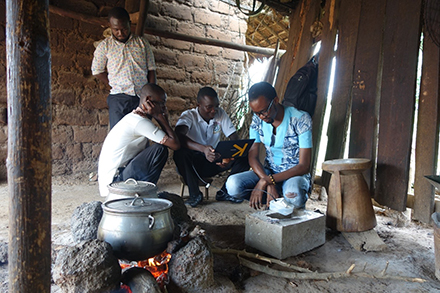 Fieldworkers with the Kintampo Health Research Center were part of a team investigating use of efficient cookstoves among pregnant Ghanaian women. (Photo courtesy of Darby Jack, Ph.D., Columbia University)

Nearly 3 billion people worldwide heat their homes and cook with solid biomass fuels, such as charcoal, wood, crop waste, and dung. As those fuels burn, they contribute to hazardous air pollution that can accumulate inside living spaces.

Household air pollution is one of the leading environmental threats to public health, responsible for over 7 percent of deaths globally, according to the World Health Organization. Exposure to cookstove smoke is associated with a range of health problems, including respiratory impacts, stroke, and heart disease. Generally, women who do the cooking, along with children under their care, are most vulnerable to the harmful effects of household air pollution.

Over the years, researchers and policymakers have examined ways to improve access to cleaner fuels and cooking technologies that can reduce household air pollution. Many of those efforts focus on enhancing adoption and sustained use of efficient stoves. But an NIEHS-funded team published a study exploring another angle: why people who use efficient stoves stop cooking with them later.

The idea sprang from a common observation in health behavior science that people attempting to cultivate healthy habits — like quitting smoking or changing diet, for example — often relapse to old behavior. The team’s study appears to be the first to apply that concept to cookstove use, the authors noted. They call their approach “the stove use discontinuance framework.”

“In cookstove research, much of the emphasis has been on the adoption question, and then getting people to continue using the stoves once they have them,” said first author Daniel Carrión, Ph.D., an assistant professor of environmental health at the Yale School of Public Health. “I was inspired by thinking about the question in a different way.” 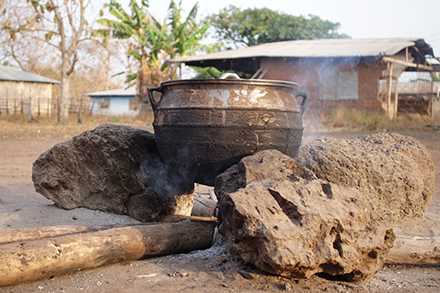 The goal of Carrión’s study was to better understand social and ecological factors hindering household use of the new, more efficient stoves.

The researchers gained insight from weekly surveys and interviews with participants conducted during GRAPHS by fieldworkers. To tackle the sheer volume of data, the team used a process called text analysis to distill and classify responses into key words that pointed to several primary reasons for stove discontinuance. For instance, terms like “broke, “leak,” and “faulty” were associated with device breakage. Other common reasons entailed fuel supply, food type and quantity, absence from the home, and lack of time.

Carrión and colleagues also used temperature sensors to monitor stove use among a subset of participants for six months prior to the end of GRAPHS and for six months afterward. They wanted to see how other factors unique to each household — such as wealth, education, number of people, and access to firewood — affected gas stove use after the fuel subsidy ended. As a proxy for wood availability, the team conducted a spatial analysis of tree canopy in a 3-kilometer buffer around each home. 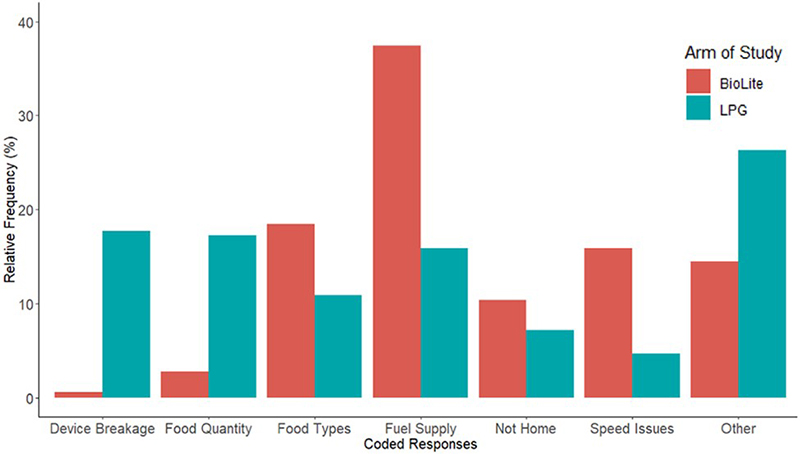 Results of a text analysis showing reasons why study participants did not use their new stoves over the course of a week.

Survey data showed that most participants used their new stoves to some extent. Specifically, by the end of the GRAPHS period, 60 percent of participants were using BioLite stoves, while 80 percent reported using their gas stoves.

In interviews, participants cited device breakage — which may also entail concerns over stove safety, the researchers noted — and food type and quantity as primary reasons for reverting to their old stoves. Indeed, traditional Ghanaian dishes such as tuo zaafi and fufu, consisting of soup accompanied by pounded starches, like cassava, plantain, or yam, require ample space and a sturdy setup.

NIEHS is a global leader in cookstove research. One recent notable project includes the Household Air Pollution Network, or HAPIN, an NIH initiative aimed at reducing the extent of disease caused by household air pollution.

The multi-partner program considers two questions: How “clean” must a stove be before meaningful health improvements occur? And how can organizations and governments encourage people to habitually use clean cooking technology?

As part of the initiative, the Household Air Pollution (HAP) health trial began in 2018. The study focused on pregnant women living in Peru, Guatemala, Rwanda, and India. A primary goal is to assess infants up to a year old for growth and respiratory impacts associated with in utero exposure to household air pollution.

In the field of cookstove research, the HAP health trial is pioneering. It is the first study of its kind to take place in multiple countries using common methods. The research team hopes that the findings will be broadly applicable to governments worldwide as they develop ways to expand access to, and promote long-term use of, clean cooking fuels. The solution may not be the same for each location.

“It’s a little naïve to think that one technology is going to satisfy everyone’s needs,” Carrión said. “We need to think about a constellation of technologies that, overall, reduce people’s exposures to air pollution.”

“Three-stone fires may provide a more stable base for stirring thick foods, and their fires could be more easily sustained with larger fuelwood for time-intensive meals,” the authors noted. “The design of future [stove] interventions should respond to specific, culturally valuable foods.”

The authors added that participants may not have known how to prepare those meals with gas or BioLite stoves.

For BioLite participants, fuel posed a barrier. The stoves require small, dry pieces of firewood. However, past research has found that scarce wood supply in the region prompts Ghanaians to use green firewood, which contains more moisture and does not readily burn.

When the researchers analyzed the sensor data, they found that of all the social and ecological variables considered, only tree canopy was significantly associated with gas stove use. Specifically, people were more likely to continue using their gas stove if sources of firewood were abundant.

“That result was counterintuitive,” Carrión said. “Our original hypothesis was that participants would probably give up the liquid petroleum gas stove faster if they could easily collect wood for their three-stone fires. But we saw the opposite effect.”

The observation could be attributed to stove-stacking, where cooks alternate between efficient stoves and traditional ones, he said. Participants who liked their gas stoves may have wanted to ration fuel when wood was easily accessible for their three-stone fires.

For his part, Carrión suggests that future research draw inspiration from social and behavioral sciences. “That side of public health has done a lot of work over the years to identify structural barriers to engaging in healthy activities,” he said. “I think that other cookstove studies should consider this framework.”