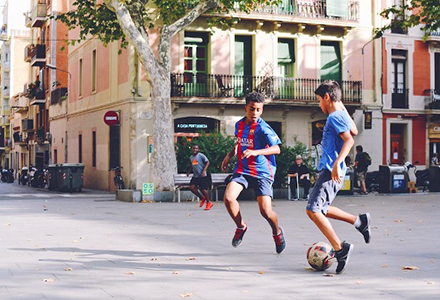 Children’s engagement in physical activity outside of school may be linked to the urban environment. (Photo courtesy of Moosa Moseneke, Unsplash.com)

Today, 4.4 billion people — over half the world’s population — live in cities, and by 2045, the global urban population is expected to reach 6 billion. Urban environments may play a key role in influencing children’s engagement in healthy behaviors, such as adequate physical activity and sleep, according to a new study by Fernández-Barrés, et. al.

The World Health Organization (WHO) recommends that children and adolescents get 60 minutes of moderate to vigorous physical activity per day, though more than half of children worldwide do not meet this recommendation. As screen time rises and children exercise less, their risk of developing noncommunicable diseases — such as cardiovascular disease, cancer, and diabetes — increases.

Children are particularly vulnerable to health effects of environmental exposures because their brains and immune systems are still developing. According to the study, areas with polluted roads, low walkability, and limited play space create a cluster of environmental risks that may lead to unhealthy behaviors and sedentary lifestyles.

“The study of urban environments as an ‘exposure’ is a growing field of research that has demonstrated large impacts on children’s health and behaviors,” said Lida Chatzi, M.D., Ph.D., an NIEHS-funded researcher and co-author of the study. “For example, the amount of green space can affect children’s opportunity to play outside, get fresh air, or socialize with their peers, ultimately influencing risk of obesity and mental health problems.”

The researchers drew on data from the Human Early Life Exposome (HELIX) study. HELIX used birth cohorts — groups of children followed from birth through their lifetime — from six European countries to assess relationships between environmental exposures and health outcomes.

Using HELIX data, the researchers gathered residential and school addresses of participants to analyze the environments where the children spent most of their time. They used mapping software to identify city characteristics related to the built environment, traffic density, and green spaces.

Through standardized questionnaires, parents reported their children’s daily physical activity; transportation mode from home to school, such as walking or biking; sedentary activities, such as watching television or playing video games; and sleep duration. Because other factors — such as children’s ages, parents’ educational attainment and income, and average socioeconomic status of the surrounding area — may also influence children’s behaviors, the researchers adjusted for these variables and then tested the association of reported health behaviors with the identified urban characteristics. 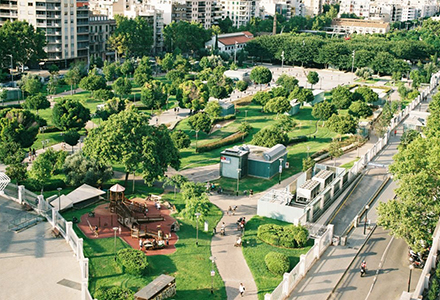 Cities with more vegetation and communal facilities are associated with more physical activity and active commuting (e.g., walking or biking to school) as well as improved perceptions of safety, according to the study. (Photo courtesy of Nerea Marti Sesarino, Unsplash.com)

Cities with more green spaces, more facilities, such as parks and other recreational areas, less people, and fewer major roads may be associated with healthier behaviors in children, according to the study.

Residence in more densely populated areas was associated with less physical activity, while home proximity to a major road correlated with less sleep.

The researchers suggested that more populated areas in Europe may have heavier traffic, leading to perceptions that they are unsafe and discouraging physical activity. Previous studies have shown associations between traffic-related exposures, such as noise and air pollution, and behavioral problems in children, as well as childhood obesity.

“The results of this study show that we need to consider how our city planning policies affect children’s health,” Chatzi added. “We found that more green space was associated with improved health behaviors, which should be considered in policies on city planning and development.”

NIEHS is committed to supporting research on children’s environmental health. NIEHS-funded research focuses on chemicals and childhood cancer, health effects of air pollution, and childhood lead exposure, among many other areas with implications for children living in urban environments.

As one of the 12 global research institutes in the Network of WHO Collaborating Centres for Children’s Environmental Health, NIEHS is also dedicated to raising awareness about environmental health challenges that children face, and to developing ways to reduce childhood diseases around the world.

NIEHS’ WHO Collaborating Centre helped develop resources such as the WHO Framework for the Use of Systematic Review in Chemical Risk Assessment and Human Health Risk Assessment Toolkit, which discuss children’s vulnerability to chemical hazards. NIEHS is also planning a webinar series focused on links between children’s health and environmental exposures.

Building on the foundation of successful children’s environmental health research projects, NIEHS established the Collaborative Centers in Children’s Environmental Health Research and Translation to share key research findings with communities facing increased exposure to environmental hazards. Currently, there are six centers across the country that serve as a resource for researchers, federal and state agencies, health care professionals, and community members who are collaborating on practical solutions to protect children’s health.

“Reducing childhood lead exposures has been a longstanding priority of the Task Force,” said Leith States, Chief Medical Officer at the HHS Office of the Assistant Secretary for Health, and Co-Chair of the Task Force Senior Steering Committee. “While there is no safe level of lead in children’s blood, the blood-lead reference value (BLRV) has been a valuable tool in screening communities for elevated levels of lead exposure. One of the actions in the FLAP was to evaluate and update the BLRV, which was part of the government-wide approach around lead safety to improve children’s health outcomes.”

Children who live in urban settings may also be more susceptible to health problems such as asthma.

“The Asthma Disparities subcommittee is a decades-long collaboration driven towards quantifying asthma burdens in communities and understanding how to address them,” said Grace Robiou, Acting Director of the EPA Office of Children’s Health Protection, and Co-Chair of the Task Force Senior Steering Committee. “The subcommittee launched the Federal Action Plan to Reduce Racial and Ethnic Asthma Disparities, which provides a road map for federal partners to support local communities in reducing the conditions that result in health disparities for children with asthma.”