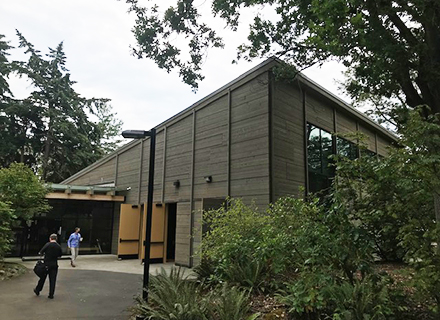 The University of Washington (UW) hosted the 2022 Disaster Research Response (DR2) workshop in Seattle. Sponsored in part by NIEHS, it was the fifth in a series of training workshops under the DR2 program to empower stakeholders and strengthen capacity when responding to disaster events. Participants included representatives from academia, the private sector, tribal communities, community-based groups, as well as government from the local, state, and federal levels.

Seattle was a fitting host for the workshop, as the state of Washington experiences ever-mounting impacts of climate change, including wildfires and extreme heat waves. Also, the Pacific Northwest routinely faces uncertainty from earthquake risks, inland and offshore, as part of the Cascadia Subduction Zone (CSZ). Tsunami may result from offshore earthquakes.

The CSZ threatens the entire Pacific Rim and necessitates intergovernmental cooperation, among states and internationally between the U.S. and Canada, to fully understand the magnitude of potential disasters.

The CSZ was one of several points of discussion on the value of global partnerships in disaster research. The panel, moderated by UW’s Dan Abramson, Ph.D., included discussions from Shoji Nakayama, M.D, Ph.D., of Japan’s National Institute for Environmental Studies (NIES); Elizabeth Maly, Ph.D., of Tohoku University in Sendai, Japan; and Ashley Morales-Cartagena, Ph.D., of Pontificia Universidad Católica Madre y Maestra in the Dominican Republic.

“Community engagement is local, but it functions as part of global collaborations. National and international partners share and exchange information that help us work within our own regions,” Abramson said.

Nakayama, formerly with the U.S. Environmental Protection Agency, and Richard Kwok, Ph.D., of NIEHS, helped shape the DR2 Resources Portal. Following the events of the Tōhoku earthquake and tsunami in 2011, Nakayama returned to Japan and saw an opportunity to work with his U.S. counterparts. This work included developing a repository of DR2 tools that had been translated from English to Japanese to enable communication at the community level. These efforts between NIEHS and Japan’s National Institute for Environmental Studies helped lead to a 2015 Memorandum of Understanding (MOU) between the two entities, formalizing an agreement to cooperate on disaster-related research and chemical safety testing. NIEHS and NIES are in the process of renewing the agreement to further enhance this collaboration in the coming years.

Nakayama, when discussing the international partnership, said, “no one can do everything, but everyone can do something.”

Maly shared her own experiences working alongside others as part of the Architecture and Urban Design for Disaster Risk Reduction and Resilience (ArcDR3) Initiative. ArcDR3 is a global cooperative of 11 universities from regions across the Pacific Rim with recurring risks of natural disasters. It established a collaborative research studio for conducting projects, inviting in peers from other institutions, and holding open forums to share research findings with the public.

Maly reminded the group that “these research partnerships are great, but the best ones are built organically, over time. Trust and understanding of one another’s research priorities and capabilities can build over time which, in turn, makes for more relevant studies.”

Maly and Abramson underscored the benefits of increasing co-authorship opportunities as a way to solidify relationships across institutions that can lead to essential research projects down the road.

Within these global networks, there is a need for training to ensure teams have access to the same knowledge and capabilities after a disaster event. Morales-Cartagena detailed how the Dominican Republic is a hotbed for natural disasters, which spurred the creation of the Centro de Investigación de Resiliencia y Riesgos Multi-Amenazas (CIRRMA) as a multi-hazards research center in February 2020.

CIRRMA leadership, identifying a gap in the training for their engineering students, partnered with UW. Public health students from UW led workshops on how to conduct field work and collect community assessment data. The engineering students became equipped to assess not only structural damage following disaster but also the human toll. CIRRMA also has ongoing partnerships with researchers from the U.S. Geological Survey and Federal Emergency Management Agency to inform student curriculum.

The panel emphasized that many nations lack access to the tools that benefit research institutions represented at the DR2 event. Nakayama highlighted that the outbreak of wildfires across the U.S. is mirrored in other parts of the world, including Thailand. The lessons communities in the Pacific Northwest learn from on-the-ground actions could be shared and translated to communities in the South Pacific. The need to facilitate these global relationships and prepare researchers now will grow as climate change continues to exacerbate natural disasters around the world.