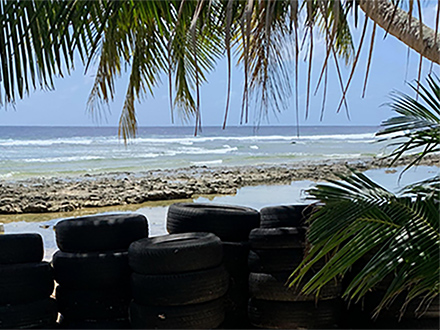 My first assignment as the medical entomologist for the U.S.-Affiliated Pacific Islands (USAPIs) was to respond to the dengue outbreak in the Republic of the Marshall Islands (RMI). I traveled there to assist the RMI Ministry of Health and Human Services vector staff in spraying larvicides and adulticides against mosquitoes around dengue cases in Majuro. The islands and atolls consist of a chain of low-lying islets only a few feet above sea level. Though my upbringing and professional experience in French Polynesia prepared me to work in remote island settings, I was not aware of the ways that climate change is already disproportionally affecting the communities of the RMI.

As we drove around Majuro in our fogging truck to spray dengue patients’ homes and surroundings, the driver was having to avoid the waves crashing onto the main road. For many homes, seawalls are the only protection against the increasing impacts of waves and king-tides due to rising sea levels. Climate change is also impacting health. Mosquito-borne diseases (MBD) outbreaks have increased drastically over the last decade with dengue, then Zika and chikungunya, and dengue again, with the latest outbreak having begun in 2019 and continuing over much of the period since.

Other USAPI jurisdictions also fought dengue outbreaks during this time, including Guam, Palau, and the Federated States of Micronesia (FSM). Addressing MBDs in the USAPIs has been highly reactive, where vector management typically is asked to respond to dengue in response to hospital cases. The lack of trained health workforces, limited resources, and geographical remoteness means that USAPIs must rely on outside input for assistance. By then, it’s usually too late and sporadic cases of disease turn into long-term outbreaks spanning multiple years.

MBD outbreaks are forecasted to increase in frequency and strength because of climate variation and extreme weather events. Paradoxically, compared to many larger nations, contributions of the Pacific Island Countries and Territories, including the USAPIs, to global greenhouse gas emissions are negligible. However, they are among the first and hardest hit by the effects of health impacts of climate change.

With the support of the U.S. Department of State, the Pacific Island Health Officers’ Associations teamed up with FSM and RMI leadership in building early warning systems against dengue. We are now collecting and analyzing climate, socio-demographic, disease, and mosquito surveillance data for predictive modeling to forecast outbreaks. The early warning systems will aim to prevent outbreaks by providing sufficient lead time to allow FSM and RMI officials to make timely decisions, implement preventive measures, and enhance the cost-effectiveness of vector control operations in response to forecasted risks.

In March, I presented the project as a study case with others at the Consortium of Universities in Global Health annual meeting focusing on bridging the gap between knowledge and practice. After this meeting, a working group including meeting presenters and NIEHS staff convened to share experiences and counsel on everyone’s projects based on implementation science. I have since applied what I’ve learned and have begun to fine-tune our activities and engagements with FSM and RMI stakeholders to tailor vector management protocols, training activities, community engagements, and preparedness operations.

To increase usability, we have created dashboards for visualization so that uploaded data can be available to FSM and RMI health officials in near real-time, thus enabling data-driven decision-making. We look forward to the resumption of regional travel and are planning to hold face-to-face training with stakeholders and engagements with the community to identify adaptation plans that are relevant to the Micronesian cultures.

If effective, the health officers will work to replicate the model across the USAPIs. Regional implementation will be facilitated by the USAPI members of the Pacific Islands Vector Management Council. The council members include vector managers from the RMI, FSM, Guam, Palau, Northern Mariana Islands, and American Samoa. These members share responsibilities for managing and implementing best practices of the regional plan throughout the USAPIs and will incorporate early warning systems into the council’s practices. Partners, including the U.S. Centers for Disease Control and Prevention, Pacific Southwest Center of Excellence in Vector-Borne Diseases, Walter Reed Biosystematics Unit, and Association of State and Territorial Health Officials, work closely with the council to build capacity in vector surveillance and control of the region.

For many climate experts, the Pacific Island Countries and Territories, including the USAPIs, are considered the “canaries in the coal mines” of climate change due to the vulnerabilities from the jurisdictions’ geology, geography, demographic and socio-economic factors. An example is Zika isolated in Africa, initially recorded in FSM-Yap in 2007, then throughout the pacific region in 2012-2015, before gaining worldwide attention and spreading to the Americas. As a solution, we hope climate-based early warning systems will position climate change and health as a high priority for regional health officials. We will continue to build climate resilience in the USAPIs against climate-sensitive diseases like dengue, and hope that our road maps will be used by our Pacific neighbors and beyond.