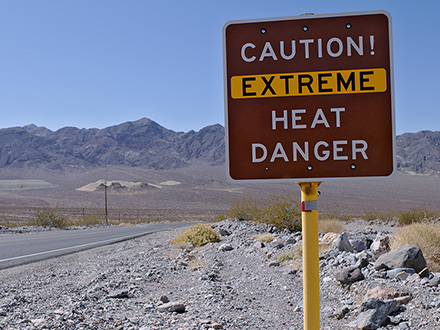 More than a third of heat-related deaths between 1991 and 2018 can be attributed to increasingly severe temperatures associated with human-induced climate change, according to a new study. Published in Nature Climate Change, it is the largest attribution study to date on the human health impacts of climate change and points to the need for more and advanced mitigation, adaptation, and resilience efforts.

“The health impacts of climate change are not something occurring in the future; they are already happening,” said lead author Ana M. Vicedo-Cabrera, Ph.D., researcher at the Institute of Social and Preventive Medicine, University of Bern. “We know from previous studies that extreme temperatures are bad for our health. We also know that climate change will make things more difficult. But now for the first time, we have an idea of what the footprint of climate change has been in terms of heat-related mortality.”

The study, led by the University of Bern and the London School of Hygiene and Tropical Medicine, is part of ongoing efforts by the Multi-Country Multi-City (MCC) Collaborative Research Network, an international research program, to analyze the associations between environmental stressors, climate, and health. In this study, the researchers assessed data from 732 locations in 43 countries around the world to determine the mortality risks associated with additional heat exposure due to increasing global temperatures.

“One of the novelties of this analysis is that for the first time we used observed temperature and mortality data across hundreds of locations around the globe for assessing vulnerability in an attribution study,” said Vicedo-Cabrera. “A crucial point is that vulnerability to heat is unique in each location.” 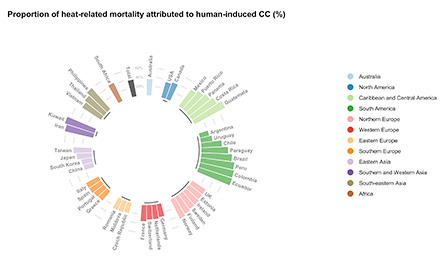 The researchers estimated that 37% of all heat-related deaths are attributable to human-induced climate change. While these findings vary widely across regions and countries, the researchers observed increases in mortality in every continent, resulting in dozens to hundreds of deaths each year. Among the countries analyzed, the contribution of climate change on heat-related mortality was highest (greater than 50%) in southern and western Asia, Southeast Asia, and parts of Central and South America.

To determine these findings, the researchers used a detection and attribution approach that assesses changes in climate and weather over time, one being anthropogenic forcing, or human activity. The researchers assessed the association between mortality and heat in the four warmest consecutive months in 732 locations. They modeled scenarios with and without climate change from human activity. Then, to estimate the heat-related mortality burden, the researchers calculated the number of deaths attributed to heat occurring when temperatures exceeded an optimum point for human health.

“The idea of the attribution study is that we have one factual scenario that mimics current conditions of climate versus a counterfactual scenario that is our climate without global warming,” said Vicedo-Cabrera. “We use the difference of these two scenarios and model what is and what would have been the excess mortality due to heat to determine the human-caused impact.”

The authors acknowledged limitations to the study, including a lack of data in large parts of Africa and South Asia as well as in specific countries where data were restricted to only one or two cities. The researchers also noted that the study does not account for possible societal changes over time, such as mitigation efforts of heat-related exposures.

To address some of these limitations, members of the MCC Collaborative Research Network including Vicedo-Cabrera, recently published a study to further analyze global estimates of cold- and heat-related mortality across 750 locations around the world. The study, led by Yuming Guo, Ph.D., professor of global environmental health and biostatistics at Monash University, expands the scope to include more regions, mostly in South Africa and Southeast Asia.

"As the climate warms, it is expected that this proportion will irreversibly increase in the next decades,” said Vicedo-Cabrera. “This will translate into a much larger mortality burden that will put extra pressure on health systems and will bring additional costs to governments."

In the U.S., one way government agencies are working together to address climate change is by estimating the social costs of greenhouse gas emissions. In January 2021, President Biden signed an executive order revitalizing the Interagency Working Group on the Social Cost of Greenhouse Gases and revising the costs associated with greenhouse gases (GHGs), such as carbon dioxide, nitrous oxide, and methane. The social costs of GHGs are the “monetary values of the net harm to society associated with adding a small amount of that GHG to the atmosphere in a given year,” according to the technical support document. The working group issued interim values for these gases in February 2021. For example, carbon dioxide has been set, on an interim basis, to $51 per metric ton.

A cost on greenhouse gases has implications for both federal and state entities. The values are used for cost-benefit analyses, which affects regulatory decisions, permitting, and rulemaking. These interim values, and public comments on them, will undergo further evaluation. The working group expects to issue final values by January 2022.

NIEHS Activities in the Area of Extreme Heat

NIEHS continues efforts with other agencies to address health effects of climate change and extreme heat. Through the U.S. Global Change Research Program and National Integrated Heat Health Information System, NIEHS, the National Oceanic and Atmospheric Administration, and the Centers for Disease Control and Prevention developed the Climate and Health Monitor and Outlook, an integrated sub-seasonal to seasonal data resource created to help inform public health decision-making to protect communities from the health impacts of extreme heat.

On August 9, 2021, the Intergovernmental Panel on Climate Change (IPCC) Working Group I released the first installment of the Sixth Assessment Report Climate Change 2021: The Physical Science Basis. The report shares the latest in the understanding of climate system and climate change, including the human influence on these areas, and indicates “climate change [is] widespread, rapid, and intensifying.”