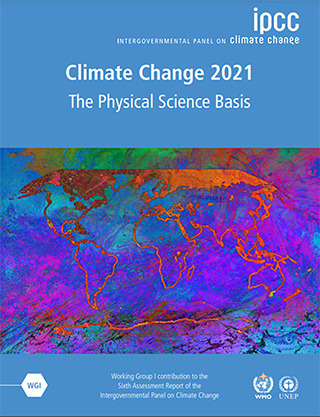 July 2021 was the world’s hottest month ever recorded, marking a significant milestone for climate change. That month, global surface temperature reached 1.67 degrees Fahrenheit (0.93 degrees Celsius) above the century average. The Pacific Northwest region in the U.S. and Canada, Eastern Europe, Northeast China, and Japan experienced record-breaking heat. In the contiguous U.S., the summer of 2021 slightly surpassed the 1936 Dust Bowl Summer as the hottest on record.

Heat is one of many indicators used to assess the status of Earth’s climate. Two international reports published in August 2021 evaluated climate indicators related to heat, greenhouse gases (GHGs), natural disasters, oceans, and more, to capture the current state of climate change. The Intergovernmental Panel on Climate Change (IPCC) released the first part of its Sixth Assessment Report (AR6), Climate Change 2021: The Physical Science Basis. The American Meteorological Society published their annual assessment on the state of the global climate in 2020. The findings of these reports together provide a comprehensive view of the climate system to date.

“Climate change is already affecting every inhabited region across the globe,” affirms the first installment of the IPCC AR6. Prepared by 234 scientists from 66 countries, this report examines the extent to which changes are occurring on Earth’s land, oceans, and atmosphere – its biosphere. Their conclusions deem it “unequivocal” that human influence has contributed to global warming, finding that approximately 1.1 degrees Celsius warming can be attributed to emissions of GHGs from human activities. Based on observational data of historical warming from 1850 to 2020, global temperature will reach or exceed 1.5 degrees Celsius warming in the coming decades.

According to the authors, climate change is affecting weather and climate extremes that will vary by region around the world. The report indicates that human influences through GHG emissions are contributing to these extremes, producing events such as increased heatwaves, heavy precipitation, droughts, and tropical cyclones. As global temperature increases, more water evaporates into the air. More precipitation on average leads to intensification of the water cycle, which can alter weather patterns and can produce more severe rainfall and associated flooding.

The report mentions that emissions of carbon dioxide (CO2), a GHG and main driver of climate change, are also negatively impacting coastal areas and oceans. Coastal areas will continue to experience sea level rise during this century, contributing to flooding and coastal erosion. The authors state that oceans are also experiencing warming, acidification, and reduced oxygen levels largely due to increasing global temperature and increased absorption of CO2.

While global surface temperature will continue to rise in the coming decades, significant reductions in GHG emissions will be imperative to stave off dangerous levels of warming, according to the report. Emissions of GHG scenarios estimate short-term, mid-term, and long-term (within 20 years, within 40 years, and within 80 years, respectively) impacts of warming. Only under a “very low” GHG emissions scenario could global temperatures be kept under 2 degrees Celsius by the end of the century. This scenario would require limiting CO2, which reached an atmospheric global average of 410 parts per million, toward net zero, as well as “strong, rapid, and sustained reductions” in methane.

The IPCC, an intergovernmental body of the United Nations, has authored the assessment report since 1990. This physical science report is one of three working group reports that make up the IPCC AR6. Two other working groups will assess the regional effects on ecosystems and biodiversity and their implications for society and progress in limiting emissions and mitigation strategies, respectively. The final IPCC AR6, including a synthesis report, will be published by September 2022. This first report will guide discussions for the 2021 United Nations Climate Change Conference (COP26), to be held in November 2021 in Glasgow, Scotland, United Kingdom.

The 2021 United Nations Climate Change Conference will incorporate the 26th Conference of the Parties (COP26) to the United Nations Framework Convention on Climate Change. The conference will bring together more than 190 world leaders to devise actions to achieve the goals of the 2015 Paris Agreement. This agreement is a legally binding international treaty on climate change, with a goal to limit global warming. President Biden and representatives from U.S. federal agencies, such as the U.S. Department of Health and Human Services and U.S. Department of State, will attend COP26.

The State of the Climate 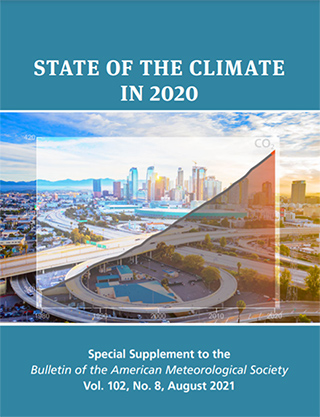 American Meteorological Society State of the Climate in 2020 published in August 2021.

The American Meteorological Society (AMS) State of the Climate in 2020 report, led by the National Oceanic and Atmospheric Administration (NOAA) National Centers for Environmental Information, adds to the evidence presented in the IPCC physical science report. The AMS report emphasizes that even with a 6%-7% reduction in CO2 emissions due to the economic slowdown of the COVID-19 pandemic, Earth still broke many global climate indicator records. These records included sea level rise, ocean warming, permafrost loss, and GHG concentrations.

The report, which incorporates contributions from more than 530 scientists from around the world, analyzed multiple independent datasets, including information from environmental monitoring stations and instruments in the field. The findings of this report incorporate year-by-year comparisons that highlight evidence of a dramatically changing climate.

Some of the main conclusions of the report determined:

Climate indicators and trends, highlighted by the IPCC physical science and the AMS state of the climate reports, are presenting new challenges on human health. Climate change is making many existing diseases and conditions worse, but it may also introduce new threats into new regions or communities, according to NIEHS. Better understanding of the impacts of climate change on human health is important to federal health agencies and the research community.

Within the National Institutes of Health, NIEHS and the Fogarty International Center (FIC) co-lead the NIH-wide Climate Change and Health (CCH) Working Group. The CCH Working Group is spearheading a bold new effort to provide leadership and coordination to NIH research and research translation on the health implications of climate change.

“It is vital for the vast NIH research enterprise to rise up to help meet the nation’s needs for biomedical and public health science in response to the evolving climate crisis,” said NIEHS Senior Medical Advisor and CCH Co-chair Aubrey Miller, M.D., M.P.H.

FIC CCH Co-chair Joshua Rosenthal, Ph.D., noted that the CCH Working Group is built on the genuine enthusiasm of many NIH staff for the topic who have been working overtime to develop a new research agenda. The group draws on diverse expertise in the fields of environmental health, data science, health equity, cardiovascular and pulmonary health, infectious diseases, natural disasters and climate change, mental health, and more.

NIH recently released a request for information to identify research gaps and priorities to help guide the NIH response to the rapidly growing concerns, in the U.S. and globally, surrounding the impacts of climate change on human health and the well-being of our communities.