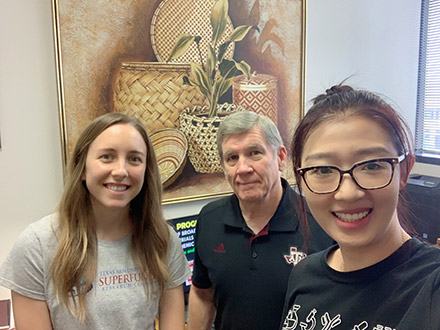 Phillips and SRP trainees Sara Hearon, left, and Meichen Wang, right, are developing enterosorbents that can be added to food or water to reduce exposure to harmful chemicals.
(Photo courtesy of Tim Phillips)

A therapeutic sorbent technology developed by NIEHS Superfund Research Program (SRP) grantees is based on binding of toxic chemicals in the body to reduce their bioavailability and toxicity. Made of nutrient-enriched clays that are safe for consumption, the enterosorbents can tightly bind complex mixtures of hazardous chemicals in the stomach and intestines, thereby decreasing chemical exposures and reducing the likelihood of adverse health effects.

These new sorbent materials build on more than 30 years of sustained work by Tim Phillips, Ph.D., and his research team at Texas A&M University (TAMU), along with numerous collaborators. Over the years, Phillips and his team at the TAMU Superfund Research Program (SRP) Center have developed highly functionalized clays as broad-acting sorbents to reduce exposure to harmful contaminants in food and water, including metals, pesticides, polychlorinated biphenyls, and polycyclic aromatic hydrocarbons, as well as mycotoxins.

Natural disasters, such as floods and hurricanes, can redistribute pesticides in the environment, contaminating food and water. During outbreaks of severe drought, aflatoxins, which are produced by fungi growing on nuts, corn, wheat, and rice, can contaminate food supplies of humans and animals. They cause the most damage in low- and middle-income countries (LMICs), where food shortages lead people to eat contaminated food or feed it to their livestock, where toxins are then passed along to humans through milk or meat. Aflatoxins are highly toxic, resulting in sickness, cancer, and even death, and are a significant cause for concern for food safety and public health. In fact, estimates suggest as many as 4.5 billion people in developing countries are chronically exposed to aflatoxin.

To address these and other toxic concerns, the researchers refined and processed sodium and calcium montmorillonite clays and enhanced their binding to harmful substances in the body through amendment with nutrients like L-carnitine and choline. The team first characterized how the clays interacted with and bound to mycotoxins such as aflatoxins and zearalenone and the commonly used herbicide, glyphosate. They determined that acid processed montmorillonites were effective at binding all three contaminants. They also demonstrated that the new enterosorbent materials significantly decreased the toxicity of individual contaminants and mixtures, using an in vivo model.

“We’re excited to see where this technology will go,” said SRP Health Scientist Administrator Michelle Heacock, Ph.D. “These strategies may provide a practical and cost-effective approach for mitigating environmental risk factors for disease, particularly during emergencies.” 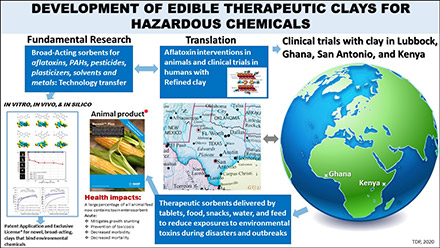 Pictogram illustrating the project-to-field pathway for the development of therapeutic clays by the Phillips group.
(Photo courtesy of Tim Phillips)

“Our team has leveraged decades of research to develop edible therapeutic clays that can mitigate toxin exposures following outbreaks and emergencies,” said Phillips. “My main goal has been to translate global and cost-effective strategies and interventions to reduce toxin exposures and the severity of disease in animals and humans.”

Translating Technology from Animals to Humans

Focusing on the global health concerns surrounding exposure to aflatoxin, Phillips was the first to use sorbents in animal feed to bind aflatoxin, reduce exposure, and protect animal health. Importantly, their approach did not affect nutrient utilization, body weight, or milk quality and yield in animals. These therapeutic clays are currently being added to animal diets and used to treat the disease throughout the world, including in Thailand, Taiwan, China, Brazil, the Philippines, Singapore, Japan, Europe, Latin America, Australia, New Zealand, India, and Africa. According to the researchers, these sorbents can be particularly useful in low-resource settings where food shortages increase exposure risk. 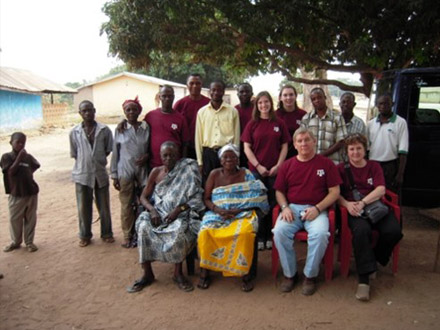 Community engagement ceremony at a village in the Northern Ashanti region of Ghana showing the king father and queen mother with the Phillips group.
(Photo courtesy of Tim Phillips)

After demonstrating that a refined aflatoxin-binding clay was safe for animal consumption, the team confirmed its effectiveness and safety for humans in six clinical trials in the U.S. and Africa. These studies tested delivering the clay through capsules, food, and water. They found that the technology reduced aflatoxin exposure without interfering with some important vitamins and nutrients.

Through his research in Texas, Senegal, the Northern Ashanti Region of Ghana, and the Eastern Province of Kenya, Phillips has focused on developing and delineating toxin enterosorbent strategies to mitigate environmental risk factors for disease, including aflatoxins. He is particularly interested in applying these solutions in vulnerable populations of humans and animals at high risk for exposure in low resource settings and LMICs. Based on this work, the preferred delivery of a therapeutic dose of sorbent may eventually be through ingestion of snacks, food ingredients, condiments, and flavored water.

“My approach has been to develop a field-practical strategy available to large communities that may not be able to afford other options,” Phillips said. “Looking to the future, we hope to see the application of toxin binding enterosorbents in food and water following natural disasters and other emergencies where people are exposed to complex mixtures of hazardous chemicals, particularly in low resource settings.”