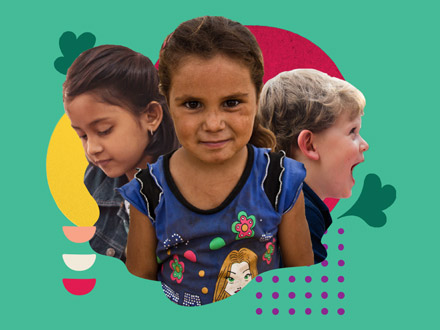 A future for the world's Children? A WHO-UNICEF Lancet Commission. Communications Toolkit.
(Photo courtesy of WHO)

Commissioned by the World Health Organization (WHO), UNICEF, and The Lancet, more than 40 prominent child and adolescent health experts from around the world collaborated to develop a new assessment on the impacts of intensifying climate threats to child health. According to the recent report, entitled A Future for the World's Children?, no single country in the world adequately protects the health, environment, and the future of its youth.

The commission, led by Helen Clark, former prime minister of New Zealand, and Awa Coll-Seck, minister of state of Senegal, calls for a global movement to protect children’s health amidst environmental pressures such as ecological degradation and climate change.

“More than 2 billion people live in countries where development is hampered by humanitarian crises, conflicts, and natural disasters, problems increasingly linked with climate change,” said minister of state Coll-Seck in the report. “While some of the poorest countries have among the lowest carbon dioxide (CO2) emissions, many are exposed to the harshest impacts of a rapidly changing climate. Promoting better conditions today for children to survive and thrive nationally does not have to come at the cost of eroding children’s futures globally.”

The report argues the case for placing the health and well-being of children and adolescents at the forefront of the United Nations’ (UN) 17 Sustainable Development Goals (SDGs), which were developed in 2015 under a unified call to action to end poverty, protect the planet, and ensure prosperity for everyone. With respect to children’s health, the SDGs are measured using a life course approach while accounting for intergenerational effects on health and well-being. Figure 3 of the report lists the children’s entitlements that would positively affect their lives, including the right to be protected, access to an education, to be healthy, and to be treated fairly and to be heard.

“This report explains how environmental risks exacerbate children’s health vulnerabilities and sets forward a plan for action,” said John Balbus, M.D., director of the NIEHS-WHO Collaborating Centre for Environmental Health Sciences. “It provides an important global perspective on how thoughtful implementation of the SDGs can advance children’s health and well-being, now and for the future.”

The commission analyzed the current data and accountability mechanisms under the SDGs and found that current efforts would not be sufficient to achieve the goals. In releasing the report, the sponsoring organizations stressed that pressing human health considerations make it even more important to address climate change now rather than at some point in the future.

“Despite improvements in child and adolescent health over the past 20 years, progress has stalled, and is set to reverse,” said Clark. “It has been estimated that around 250 million children under 5 years old in low- and middle-income countries are at risk of not reaching their developmental potential, based on proxy measures of stunting and poverty. But of even greater concern, every child worldwide now faces existential threats from climate change and commercial pressures.”

The report cites extreme weather events, water and food insecurity, heat stress, migrating populations, and CO2 emissions and associated air pollution as key threats to the health and future of children. These exposures pose a host of human health threats, including an increased risk of acute respiratory diseases in childhood, neuropsychological development, and malnutrition and micronutrient deficiencies.

To inform individual country-level accountability and action toward the SDGs, the commission developed a summary index of country performance for planning toward lessening environmental vulnerability and advancing children’s health. 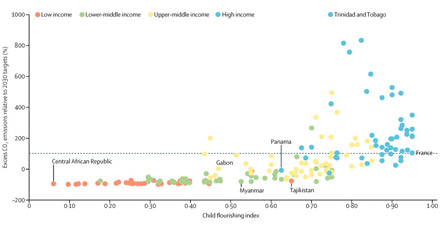 Countries' level of carbon emissions relative to 2030 targets as a measure of a country's threat to future children, compared with coefficient of child flourishing (Figure 11).
(Photo courtesy of The Lancet)

The new global index of 180 countries accounts for measures of child flourishing, developed from “survive and thrive” SDG targets including health, education and nutrition, and environmental sustainability threats. This index and subsequent ranking of country performance is useful for SDG planning and cross-country comparison. Wealthy nations tend to rank higher for survival, health, education, and nutrition rates, but because they emit more greenhouse gases, they typically trail behind some less wealthy nations when comparing sustainable levels of carbon emissions relative to 2030 targets and child flourishing rank.

According to the report, numerous upper-middle- and high-income countries greatly exceed the 2030 target per capita carbon emissions, while no low-income country exceeds the same 2030 sustainability target. Norway, South Korea, and the Netherlands rank first, second, and third, respectively, on current child flourishing, but they do not rank in the top 100 countries on the global sustainability list when considered alongside with the potential damage they might cause through greenhouse gas emissions to children.

Extensive research into children’s environmental health funded by NIEHS has increased understanding of the unique vulnerability of children to harmful physical, chemical, and biological environmental threats. Such research has also helped to guide the development of protective measures for children globally.

NIEHS founded and hosts the Network of WHO Collaborating Centres for Children's Environmental Health. The Network aims to build evidence and capacity in children’s environmental health, conduct collaborative research, raise awareness of existing and emerging issues through education and outreach, and develop interventions to reduce childhood environmental exposures.

“Addressing children's environmental health issues at the local, national, and international levels is central to the NIEHS mission,” explained Balbus. “By bringing in our expertise on climate and health and working with the other Collaborating Centres and the world’s leading research institutions, NIEHS’ Global Environmental Health program will continue to raise awareness of the important connections between the health of children and the sustainability of our planet.”