The American Journal of Respiratory and Critical Care Medicine recently published two studies on household air pollution in sub-Saharan Africa. The studies, one on prenatal household air pollution and infant lung function, and the second on noncommunicable respiratory diseases in adults, further add to existing literature in understanding impacts of exposure on respiratory health. Both studies are part of large, randomized controlled trials, funded in part by NIEHS, evaluating the potential benefits of clean cookstoves on health. Their findings suggest novel implications for assessing household air pollutants and implementing public health interventions in the region.

In sub-Saharan Africa, more than 75% of households rely on solid fuels such as biomass, wood, and charcoal for cooking. This practice, taking place indoors or near the home, produces hazardous air pollutants including carbon monoxide and fine particulates (PM2.5). Exposure to these household air pollutants contributes to increased risk of respiratory infections, such as pneumonia, noncommunicable respiratory disease, and cardiovascular disease. These contribute to nearly 4 million premature deaths a year, according to the World Health Organization (WHO). Over the last decade, research has improved and furthered the global understanding of the burden of disease attributed to air pollution. These two studies provide new information about the health effects of household air pollution at different stages of life.

Those most vulnerable to household air pollution exposure are pregnant women and their infants. Prenatal carbon monoxide exposure is associated with impaired infant lung function, which may increase risk of pneumonia in the first year of life, according to new research using the Ghana Randomized Air Pollution and Health Study (GRAPHS), a cluster randomized cookstove intervention trial. Carbon monoxide exposure was measured as an index of overall Household Air Pollution (HAP) exposure, which includes fine particles and other toxic components. The findings also show sex-specific effects, concluding infant girls are at greater risk of diminished lung development than infant boys.

“These exposures are enormous and occurring across the life course,” said study lead author Alison Lee, M.D., assistant professor of medicine in the Division of Pulmonary, Critical Care, and Sleep Medicine at the Icahn School of Medicine at Mount Sinai. “In early life, a big focus has been to look at associations of household air pollution on pneumonia for children, particularly under age 5 because of its substantial morbidity and mortality. These data suggest that one potential pathway for the increased risk of pneumonia is through impaired lung function.” 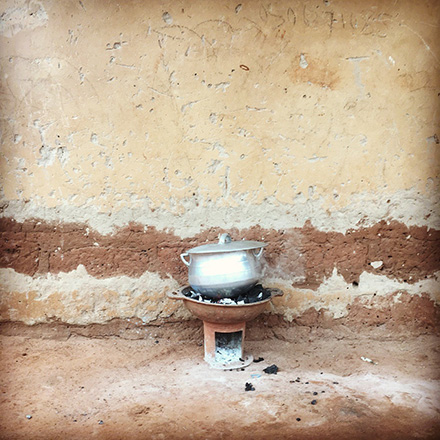 Women in Kintampo, Ghana, traditionally use solid fuels such as wood and biomass for cooking, releasing harmful carbon monoxide through combustion.
(Photo courtesy of Alison Lee)

This study separates itself from other previous randomized controlled cookstove intervention trials because of its focus on pregnant women and prenatal household air pollution. The researchers outfitted mothers with personal carbon monoxide monitoring devices to establish exposure levels until their child’s birth. The infant’s lung function was measured by tidal breathing analyses at 1 month of age. These results suggest effects of exposure on lung development may begin in utero. The study is currently following lung development in a portion of the children until the age of 7.

“Taken together, the household air pollution literature supports exposure-response relationships over the length of the life course on a number of health outcomes,” said Lee. “Our work adds to this literature suggesting these deleterious effects begin in utero and support the urgent need for cleaner cooking technology and fuels, beginning prenatally.”

Later in life, continued exposure to household air pollution has long been thought to increase the risk of chronic obstructive pulmonary disease (COPD) and cardiovascular disease. However, data from the Cooking and Pneumonia Study (CAPS) and Burden of Obstructive Lung Disease (BOLD) study in Malawi challenges this conventional dogma. In Chikwawa, a rural district in the southern region of the country, day-to-day air pollution exposures are three times WHO’s upper limit. Here, researchers of a cross-sectional analysis found air pollution exposures were not significantly associated with chronic respiratory symptoms or lung function abnormalities in adults, nor did the CAPS interventions show beneficial effects on these outcomes. Residents of Chikwawa, a rural district in southern Malawi, participate in the Burden of Obstructive Lung Disease and the Cooking and Pneumonia Studies measuring exposure to household air pollution.
(Photo courtesy of Rebecca Nightingale)

“The key message in this study is that more than 40% of this population has abnormal spirometry in an environment where exposure to air pollution is high,” said lead author Rebecca Nightingale, M.Sc., respiratory physiotherapist and doctoral student at the Liverpool School of Tropical Medicine. “Why such a large proportion of study participants had abnormal spirometry is unclear and needs to be investigated. But what is clear is that there is a problem with poor lung health in this environment, which will potentially lead to other health problems.”

The researchers identified high levels of abnormal spirometry, mostly in the form of restriction, as opposed to obstruction, which is more associated with COPD. In part because of these findings, they did not find a link between noncommunicable respiratory diseases and 48-hour average exposure to carbon monoxide or PM2.5. Additionally, the clean cookstove interventions, as deployed in CAPS, were not associated with a signal of beneficial effect on noncommunicable respiratory diseases.

The findings suggest the need to expand the scope of research of contributing factors that cause noncommunicable respiratory diseases in adults in Malawi and the wider sub-Saharan African region. “Clean cookstoves are simply not sufficient by themselves to address the very complicated and interacting set of exposures that people in sub-Saharan Africa are exposed to,” said Kevin Mortimer, Ph.D., professor of pulmonary medicine at the Liverpool School of Tropical Medicine and co-principal investigator of CAPS. “In relation to air pollution, simply picking off one exposure, such as exposure related to cooking, does not appear to be enough to yield beneficial health effects. There needs to be a more integrated approach to what the solutions might be.”

“Based on a lot of observational and epidemiological studies, household air pollution is considered one of the most important contributors to COPD, especially among women in the developing world and low- and middle-income countries,” said study author John Balmes, M.D., professor of environmental health sciences at the University of California, Berkeley. “Our data do not support that, but they are not sufficient to say that there is not a risk of COPD from household air pollution exposure. Household air pollution still needs further evaluation in terms of research, especially with regards to its impact on small lungs and whether that process starts early on in life."