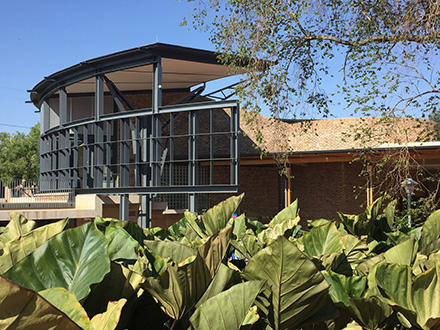 The University of Pretoria’s Future Africa Campus was specifically designed for Africa’s leading scientists and scholars to come together to leverage the benefits of transdisciplinary research to address the challenges that face Africa and the world.
(Photo courtesy of Sally Darney)

Africa, with its more than 1 billion people, faces a number of unique environmental challenges. It is experiencing accelerated urbanization and social, political, industrial, and economic development. The shift to urban living and industrialized economies in Africa has increased the number of contaminants released into water, air, and soil; these contaminants include pesticides, heavy metals, toxic industrial chemicals, and hazardous wastes, many of which are endocrine disrupting chemicals (EDCs). Recent studies indicate that exposures to some classes of chemicals, including pesticides, may be higher in Africa than in other parts of the world, suggesting that these populations may have higher risks. Unfortunately, due to this rapid development, Africa lacks the infrastructure needed to support regulatory, research, and health care agencies in their efforts to protect public health. 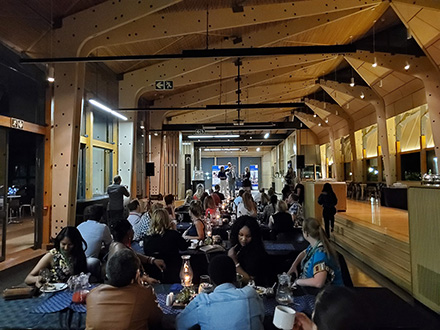 Although the burden of disease in Africa continues to be dominated by infectious diseases, countries in this region are undergoing a transition to increasing prevalence of noncommunicable diseases (NCDs), such as diabetes, respiratory diseases, kidney disease, cardiovascular diseases, cancers, and mental and substance use disorders. The causes for the increases in NCDs both in Africa and worldwide are complex and likely involve gene and environment interactions.

As part of NIEHS’ efforts to identify the unique environmental health challenges and opportunities facing Africa, the Institute sponsored the First African Conference on Health Effects of Endocrine Disruptors: Challenges and Opportunities for Africa. A summary manuscript of the 2015 meeting, published in the journal Environmental Health Perspectives, identified a number of gaps in African EDC research and called for action to find solutions for global environmental and policy issues. Attendees specifically noted that these steps should start within Africa and be undertaken within the context of African society and values so that Africans can take and maintain control of their own health and well-being.

Building on this first conference, NIEHS sponsored a Second African Conference on EDCs in November 2019. The conference themes focused on initiating, conducting, and sustaining innovative and responsive research. Significant efforts were also made to reach out to the next generation of African EDC researchers and provide training sessions for them.

Aptly, the conference was held at the University of Pretoria’s new Future Africa Campus in South Africa. The campus was specifically designed for Africa’s leading scientists and scholars to come together to leverage the benefits of transdisciplinary research to address the challenges that face Africa and the world.

Training the Next Generation of African Researchers 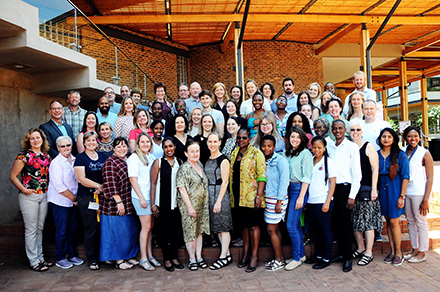 The conference started with a daylong student symposium to provide the next generation of EDC researchers a background to EDC research, focusing on the varying mechanisms of action, discussions of emerging contaminants, and translation of research findings into publications. During the first part of the symposium, Andreas Kortenkamp, Ph.D., professor of human toxicology at Brunel University in London, provided a background to EDCs and the complexity of mixture effects. Angel Nadal, Ph.D., professor of physiology at the Universidad Miguel Hernández in Spain, discussed his research findings of the unconventional actions of environmental estrogens via the estrogen receptors. Finally, Juliette Legler, Ph.D., professor of toxicology at the University of Utrecht in the Netherlands, spoke about her research using animal models, environmental studies, and associated human health. 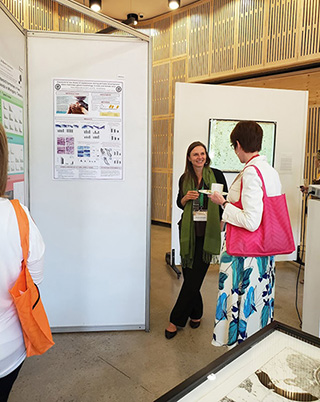 Graduate student Klara Matouskova, from the University of Massachusetts Amherst, presented a poster on her research involving the health effects of chemicals found in sunscreens.
(Photo courtesy of Laura Vendenberg)

Throughout the remainder of the conference, researchers from across the continent of Africa and across the world shared their work on a range of human and animal studies, covering topics such as water contamination, pesticide use, and exposures resulting from food and waste contamination.

Several presentations covered research projects on Dichlorodiphenyltrichloroethane (DDT), which is used as an insecticide to control malaria in several African countries. Professors Tiaan De Jager, Ph.D., and Riana Bornman, M.D., Sc.D., from the University of Pretoria reported negative associations between DDT exposures and fertility in men, and the development of the urogenital tract in boys. Sarah Kimmins, Ph.D., associate professor of reproductive biology at McGill University, reported on an analysis of sperm samples from participants in the Limpopo province of South Africa, showing that DDT exposures in men acting on the sperm epigenome may serve as a mechanism to impact fertility and health in multiple generations. 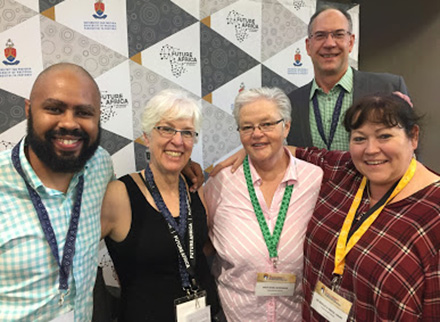 The conference offered opportunities for scientists from Africa to share their experiences, challenges, and scientific findings, many of which were unique to African communities. For example, Christoff Truter, Ph.D., from the Exotic Leather Research Center at the University of Pretoria, discussed the endocrine-disruptive properties of chemicals found in water sources used in breeding ponds in Nile crocodile farms in South Africa. Truter reported that discarded pharmaceuticals used for HIV-AIDS treatment and estrogenic chemicals can disrupt egg hatching rates and breeding success in crocodiles. Crocodile farms produce meat and leather from crocodile skin to prevent poaching and exploitation of crocodiles in the wild. Crocodiles from a breeding farm near the University of Pretoria.
(Photo courtesy of Thad Schug)

The meeting concluded with a summary discussion moderated by Sally Darney, Ph.D., Editor-in-Chief of the journal Environmental Health Perspectives. Participants discussed present and future plans to tackle the health issues and research challenges in Africa caused by EDCs. These challenges include population pressure, climate change, political instability, and communication challenges. The NIEHS Global Environmental Health program hopes to meet these challenges with continued involvement in Geo Health Hubs, the Human Heredity and Health in Africa (H3Africa) Consortium, and other capacity building initiatives. 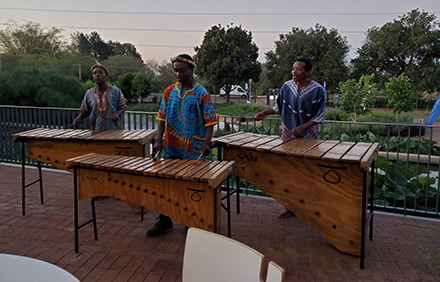 The conference included experiences with local musicians, artists, and villagers that highlighted the history and culture of South Africa.
(Photo courtesy of Laura Vandenberg)