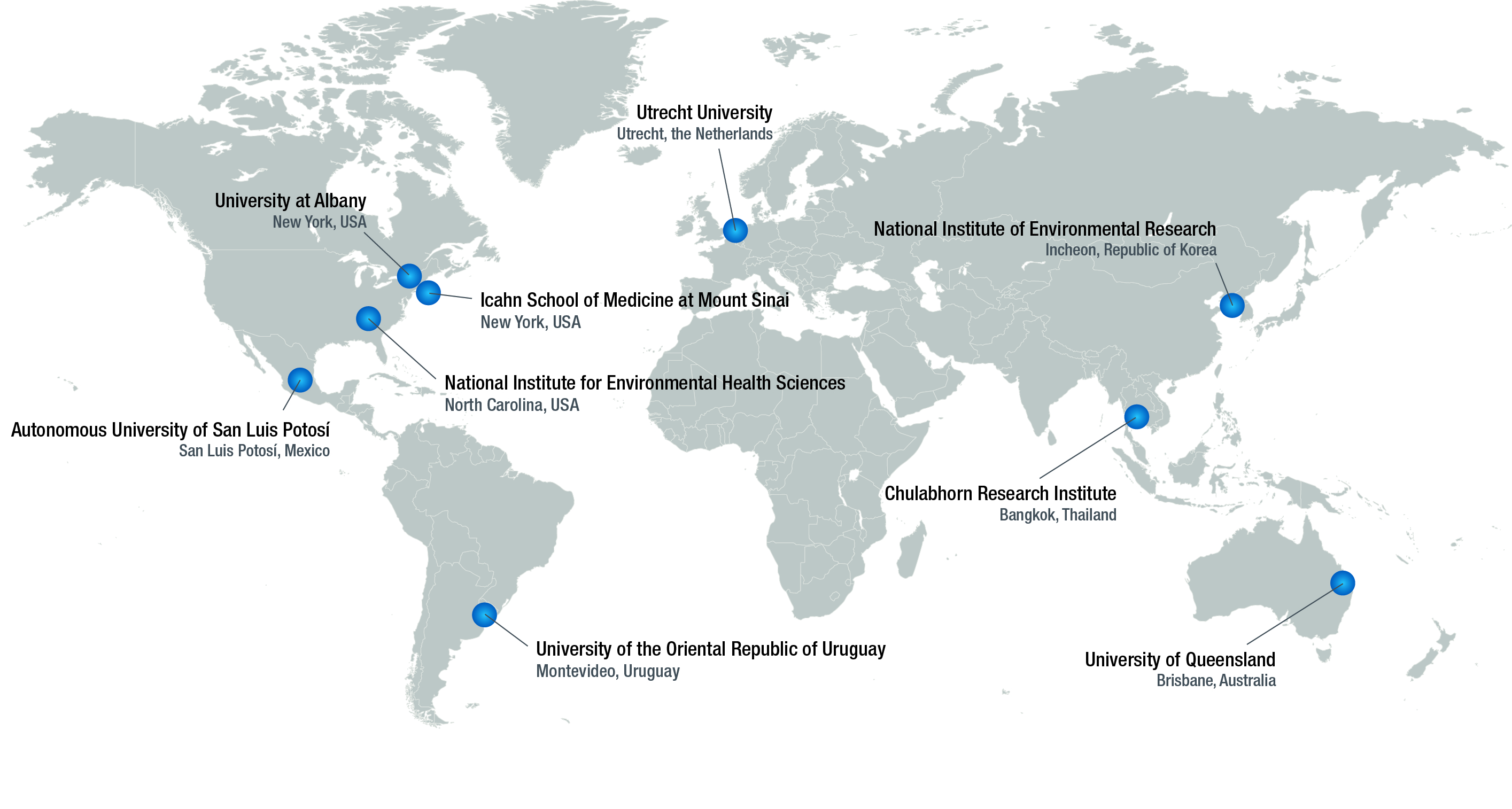 Each member institution conducts research and serves as a hub to strengthen national or regional capacity in the field of children’s environmental health. Similar to NIEHS, the members have relationships with WHO as collaborating centers. A network of institutions already active in the field facilitates sharing of expertise and helps build global capacity, according to William Suk, Ph.D., Chief of the Hazardous Substances Research branch and an NIEHS WHOCC Focus Area Lead. “In this day of needing to link and communicate, the intent is to develop a network specifically to improve the health of children from environmental exposures,” he explained.

Suk and NIEHS health science administrators Michelle Heacock, Ph.D., and Kimberly Gray, Ph.D., organized and continue to support the network. Although many of the researchers knew or knew of each other, Heacock explains that the formal network fosters relationships and helps build awareness about children’s environmental health. Using different modes of communication such as quarterly conference calls, the members foster a dialogue focused on developing strategies to reach new audiences with information about how the environment can affect children’s health.

The children’s environmental health research carried out by network members is extensive. Most are conducting long-term studies in areas such as the impacts of persistent and volatile organic pollutants, e-waste from disposal and recycling of electronics, and health effects from lead. The current members are listed below:

In the next few months, two nongovernmental organizations with an established track record in children’s environmental health are also expected to join the network. A third phase will encompass other universities and institutions with expertise in children’s environmental health, including some of the NIEHS/EPA Children's Environmental Health and Disease Prevention Research Centers that are supported by NIEHS and the U.S. Environmental Protection Agency. “By building a critical mass [of network members], we can coordinate and translate our research into better health outcomes,” Suk said.

The Value of the Network

Suk described three “legs of a stool” that will benefit from the interactions of a collaborating network: strengthening research, developing better educational materials, and building a cadre of health care providers.

Strengthening research: While each institution carries out its own research (or, in the case of NIEHS, also supports extramural research), a network allows members to more easily share resources and findings, Suk pointed out.

He also cited a March 2015 Enviornmental Health Perspectives (EHP) article on children’s health in Latin America as an example of what the network can facilitate. Drawing on a 2012 meeting sponsored by WHO and the Pan American Health Organization, the authors reviewed the most serious environmental health risks to children across the region and suggested strategies to prevent or reduce them. EHP also published a companion article to draw further attention to the issues the authors raised.

Developing better educational materials: WHO develops websites, publications, and other materials on children’s environmental health. “In order to make sure the information is updated, reliable, and relevant, the network can provide input to WHO,” Suk said. “What is critically important is that we can help ensure that the information and messages are culturally and ethnically sensitive.”

Building a cadre of health care providers: One of the network’s most important missions, according to Suk, is to train and build capacity so pediatricians, nurses, and other health care providers recognize the impact of the long-term consequences of environmental exposures in their patients.

Suk recalled an international conference in Korea with a separate one-day session on asbestos exposures, with an invitation extended to physicians. “The place was packed,” he said, noting the strong interest by the attendees and the need to translate research into practices and policies that will benefit children.

“In many parts of the world, environmental exposures are a fact of life,” Suk explained. “The network can help build a cadre of health care practitioners who understand how these exposures may be linked to viral or parasitic infections, to reduced immune responses, or to other health concerns among children such as asthma.”

The network also has a new web presence, with landing pages for each member that summarizes its research areas, cohorts, contacts, collaborators, training and development opportunities, and other valuable information. “We are populating the website in a phased approach,” Heacock said. “Eventually, we would like it to have links and resources about the work of the network members as well as others in the field.”

The network is an outgrowth of the fairly new, but growing, children’s environmental health area of concern. In 2002, International Conference on Environmental Threats to the Health of Children, held in Bangkok, Thailand, was a milestone in linking polluted, unsafe environments and disease among children. As an important output of the conference, the WHO Bangkok Statement stated, in part, “Children are uniquely vulnerable to the effects of many chemical, biological, and physical agents.” The conference and statement led the way to the now widely accepted recognition that the immune, neurological, and endocrine systems of children require targeted research and public health interventions at different stages of their development.

Since then, global investment in children’s environmental health research has grown, although many key questions about the impacts of individual and combined exposures remain. The network and other collaborations are one way to make best use of limited resources, Suk noted.

NIEHS recently marked its first anniversary as a WHOCC, after several decades of formal and informal working relationships. As a WHO Collaborating Centre, NIEHS has six other focus areas in addition to children’s health: e-waste, indoor air pollution, developmental origins of health and disease, chemical risk assessment, climate change, and training and capacity building. Suk pointed out that each of these other areas has an important “children’s” component. For example, children are part of the e-waste workforce, are disproportionately affected by indoor air pollution along with their mothers, and have unique vulnerability to the health impacts of climate change.