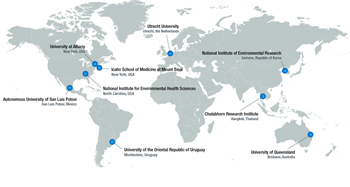 The World Health Organization (WHO) Collaborating Centres Network for Children’s Environmental Health, coordinated by the National Institute of Environmental Health Sciences (NIEHS), has a long name but a singular mission — to improve children’s health by preventing or reducing environmental threats. Each member institution within this network conducts research and serves as a hub to strengthen national or regional capacity in the field of children’s environmental health. Similar to NIEHS, the members have relationships with the WHO as collaborating centers. A network of institutions already active in the field facilitates sharing of expertise and helps build global capacity, according to William Suk, Ph.D., Chief of the Hazardous Substances Research branch and an NIEHS WHOCC Focus Area Lead. “In this day of needing to link and communicate, the intent is to develop a network specifically to improve the health of children from environmental exposures,” he explained.

Children around the world face serious health consequences from harmful environmental exposures. The Children’s Environmental Health Collaborating Centres Network is a global collaboration among research institutions with a focus on reducing this important health burden. NIEHS is involved in this network as part of the Institute’s role as a World Health Organization Collaborating Centre. In this podcast series, we explore how the network helps to advance research and interventions to improve children’s health around the world.

On April 7, NIEHS Senior Advisor for Public Health, John Balbus, M.D., joined climate change experts from federal agencies, academia, and the private sector at the White House to launch the health theme of the Climate Data Initiative. This initiative was developed as part of President Obama's climate action plan and executive order to better prepare the United States for the impacts of climate change. As part of the launch event, the U.S. government unveiled datasets that can help individuals and communities plan for the impacts of climate change on the public’s health.

International Conference of the Pacific Basin Consortium for Environment and Health

27th Conference of the International Society for Environmental Epidemiology (ISEE)