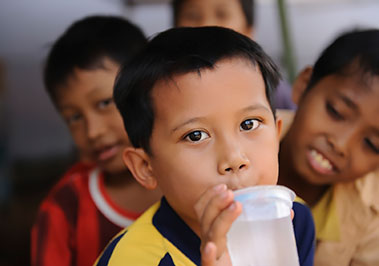 Early life exposure to endocrine disrupting chemicals and heavy metals may lead to development of metabolic syndrome later in life. These environmental toxicants are found in our air, food, water, and soil.
(Photo courtesy of iStockphoto)

A growing body of evidence suggests that disease and poor adult health may originate during fetal development and early childhood. This concept, called the developmental origins of health and disease (DOHaD) hypothesis, suggests that early life environmental exposures can alter development in a way that leads to disease later in life. In a recent review, NIEHS grantee Xiaobin Wang, M.D., Sc.D., and her colleague Guoying Wang, M.D., examined new evidence for early life origins of metabolic syndrome (MetS) and draw attention to important research gaps in this area.

Metabolic syndrome is a name for a group of conditions, including high blood sugar, high blood pressure, abnormal blood lipids, and abdominal obesity that increase a person’s risk for other health problems. A person with MetS is twice as likely to develop heart disease and five times more likely to develop diabetes than a person without MetS.

“Heart disease, stroke, and diabetes are leading causes of death worldwide, and adults with MetS have a higher risk of developing these diseases,” said the authors. “We wanted to examine how exposure to environmental toxicants during early life may lead to the development of MetS.”

The epidemics of obesity, diabetes, and MetS may be due, in part, to chemical exposures in utero and during early childhood. These early developmental periods are most vulnerable to environmental exposures and are critical stages for adipose tissue development, metabolic programming, and the subsequent risk of MetS.

The authors reviewed animal and human studies that examined how prenatal and early life exposure to endocrine-disrupting chemicals (EDCs) and metals influence the development of MetS. Human studies examining the metabolic impact of prenatal exposure to persistent organic pollutants (POPs)—a group of EDCs that persist in the environment for long periods of time—have been inconsistent, but exposure has been associated with increased weight and obesity later in life. Many POPs, such as the pesticide dichlorodiphenyltrichloroethane (DDT), have been banned in the United States for decades but are still used in developing countries. POPs are a global concern because they can be transported long distances by wind and water, affecting people and environments far from where they are released.

Studies of people exposed to heavy metals, such as arsenic, mercury, and lead, showed an increased risk of diabetes, high blood pressure, high blood sugar, and MetS. To date, the effects of these metals on metabolic disorders have been studied almost exclusively in adults, and the authors highlight the need for more prospective birth cohort studies on the metabolic consequences of exposure to metals in early life.

“Overall, the data is very limited regarding the link between prenatal and early life exposures to environmental toxicants and risk of MetS as an adult,” said Wang. To address these data gaps, the authors emphasize the need for more prospective birth cohort studies aimed at understanding exposure–response relationships, the effects of multiple exposures, and the early biological effects of exposures during critical windows of development and their long-term health consequences.

MetS and its components are generally viewed as adult problems, and strategies to reduce risk have traditionally focused on adult interventions, such as lifestyle modification. Emerging evidence that prenatal and early life exposures affect the risk of developing MetS provides an opportunity to target interventions aimed at reducing environmental exposures during vulnerable periods.

“Preventing environmental exposures during developmental periods, when they have the greatest effect, will help improve population health, minimize healthcare costs, and reduce the overall global burden of disease,” said Wang. “Such interventions will be of greatest benefit to vulnerable populations.”

NIEHS research is building an understanding of how environmental insults during early life can lead to poor adult health. As a designated World Health Organization (WHO) Collaborating Centre for Environmental Health Sciences, NIEHS is working with WHO to promote global awareness of the developmental origins of health and disease (DOHaD) and to inform global health practitioners about this emerging area of science. To accomplish this, WHO and NIEHS will jointly develop publications that define DOHaD and its importance for non-communicable disease and global health.

NIEHS is also building the global network of DOHaD researchers. The Institute has played an active role in planning the fourth international summit of the Prenatal Programming and Toxicity (PPTOX IV) conference to be held October 26-29, 2014 in Boston, Massachusetts, USA. As part of this effort NIEHS has organized a side event, “DOHaD: Impacts on Non-Communicable Diseases and Implications for Global Health,” which will be held before the conference. NIEHS will be well represented at PPTOX IV with staff presentations focusing on non-communicable diseases and implications for global health.