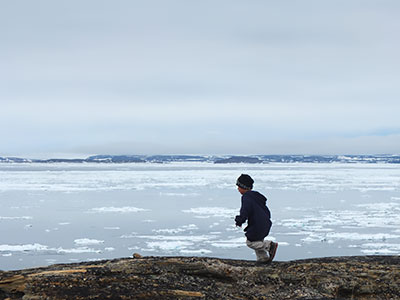 Air and water currents carry contaminants north, where they bioaccumulate in the fish and marine mammals of the Hudson and Ungava bays.
(Photo courtesy of Mélanie Lemire)

Researchers Work with Nunavik Mothers and Their Children

The region of Nunavik, located in northern Québec, is inhabited principally by Inuit communities. It is sparsely populated and thousands of kilometers from polluting industries, with seemingly crystal-clear air and water. Almost three decades ago, Éric Dewailly, M. D., Ph.D, a public health officer for the province of Québec, obtained breast milk samples from Nunavik women believing they would be so free of environmental contaminants that they could be used to calibrate laboratory equipment for assessments elsewhere in the province.

Instead, the samples had surprisingly high levels of chemicals, even after repeat testing. Levels of methylmercury and polychlorinated biphenyls (PCBs) were among the highest reported in the world.

This discovery led Dewailly, who tragically passed away in June at age 57, to initiate a collaboration with Sandra Jacobson, Ph.D., and Joseph Jacobson, Ph.D., of Wayne State University,  who were studying chronic low-exposure effects on the cognitive development of children born to women who had eaten PCB-contaminated fish from Lake Michigan. Together with Gina Muckle, Ph.D., of Université Laval, they initiated the Nunavik Child Development Study to understand the cause of the exposures and the effects on Inuit children. With major grant support from NIEHS and grants from Aboriginal Affairs and Northern Development Canada (Northern Contaminants Program) and the Canadian Institutes of Health Research (CIHR), they have been conducting research in the region for more than 20 years—recruiting a cohort of pregnant women in the 1990s, then following up with their children at 6 and 11.5 months and at 5 and 11 years. 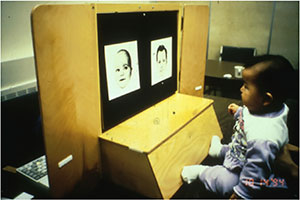 A Nunavik infant participates in the Fagan assessment.
(Photo courtesy of Sandra Jacobson)

“First, we wanted to understand why they [the Nunavik women] were so highly exposed, living so far from cities,” explained Muckle. “Then we wanted to learn more about the effects of that exposure on health.”

It was a mutually beneficial collaboration. “We were able to bring in our expertise in infant and child cognitive and neurobehavioral assessments, which are often more sensitive than physical assessments to teratogenic effects,” Sandra Jacobson said. The Jacobsons also were interested in determining the degree to which the effects they had observed in their Michigan cohort were also seen at the higher levels of PCB exposures in Nunavik.

Three aspects of the study stand out for possible application in other locations: the contaminants and their effects on young children, the assessments used to discern these effects, and the way the group has worked with the community to design the study and communicate its findings.

The three principal contaminants of concern in the Nunavik study are PCBs, methylmercury, and lead. Methylmerury, a ubiquitous environmental contaminant, and PCBs, which have a long half-life and persist in the environment despite being banned in manufacturing in 1975, are present at high levels in the fish and marine mammals that are the staple of the Inuit diet, as described by Muckle and her colleagues in a 2001 article in Environmental Health Perspectives (EHP).

But why are they found at such high levels in these animals, given that these communities are so far away from their sources? "The atmosphere picks up these contaminants,” said Joseph Jacobson. “They travel through prevailing air and water currents and are distributed in what look like pristine areas. PCBs and other contaminants bioaccumulate in food chain, resulting in high levels in the large fatty fish and mammals that constitute a significant portion of the Inuit diet." (2MB)

The principal source of lead exposure in this region is from consuming local game that has been shot with ammunition containing lead. A ban on lead pellets has been variably enforced over the years––during those periods when it was enforced, the levels of exposure decreased in the region.

The region of Nunavik spans the northern one-third of Quebec. North of the 55th parallel, it has a population of 11,000 people in 14 communities spread across almost 500,000 square kilometers, an area larger than the country of Germany. Only boats and planes link the region with the rest of the country; even from village to village, people travel by boat, plane, or by snowmobile during the winter months.

As detailed in a 2011 health profile, about one-third of the population is under the of age 14, more than double the rate in the rest of the province.  Few (3 percent) are over the age of 65. With average income lower than the rest of the province despite a higher cost of living, about one-quarter of the population has experienced food insecurity in the previous month.

According to the Arctic Council, about 4 million people live in Arctic regions today in Canada, the United States, Russia, Iceland, and countries in Scandinavia. Each culture and area is unique, although they may share some commonalities in terms of diet and exposures. 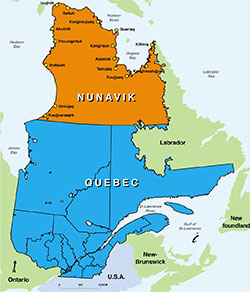 Nunavik has a population of 11,000 people in 14 communities spread across almost 500,000 square kilometers, an area larger than the country of Germany.
(Photo courtesy of Gina Muckle)

The researchers used three infant assessments: the Bayley Scales of Infant Assessment, a widely used global developmental assessment; the Fagan Test of Infant Intelligence, in which photographs of faces are shown to infants to assess their recognition memory and information processing speed; and A-not-B task, which uses hiding a toy in different locations to assess working memory.

“Very early on, people thought contaminants would affect cognitive performance on the Bayley Scales, but this was not generally the case,” Sandra Jacobson said. “However, more narrow-band tests like the Fagan and the A-not-B tests were much more sensitive.  Moreover, the PCB effects on recognition memory have subsequently been confirmed in numerous other studies worldwide.” In other words, relying only on the more global Bayley test did not show any issues of concern. In this research and in studies in Michigan, South Africa, and Taiwan, “we’ve also been interested to see which of the infant assessments and outcomes can predict cognitive and behavioral performance, including IQ, later in life, so you don’t have to wait until the children are older to identify children at risk,” she said. 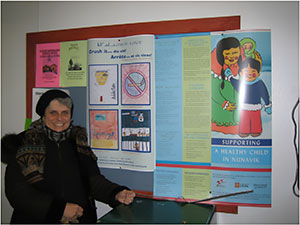 Researcher Sandra Jacobson points to one of the posters, displayed in stores and other gathering places, that explained the study to community members.
(Photo courtesy of Sandra Jacobson)

Partnering with the Community

“We learned from the beginning that we could not develop a mother–child cohort in Nunavik without great support from the communities and stakeholders,” said Muckle. She and Dewailly met with the villages’ Municipal Councils and with a committee of health and community leaders, and she participated in many radio call-in shows with community members. “The feedback was that they would support us, but they had other, pressing research questions and issues to address, including effects of prenatal exposure to alcohol and drugs as well as food insecurity on child development.”

As a reflection of these concerns, the community-based committee that began as the “PCB Committee” changed its name to the Nunavik Nutrition and Health Committee. “The committee did not want to just focus on contaminants but on nutrition and traditional foods” Muckle said.

Community input also avoided mistakes that would have seriously compromised the research. For example, as Sandra Jacobson noted, the original plan was to ask local midwives to interview mothers in Inuktitut, the local language. However, not only were most of the mothers comfortable in English or French, they preferred to talk with trained researchers and not share confidential information with the midwives.

The researchers also committed to presenting findings to the communities before publishing them. Muckle stressed this extended far beyond a perfunctory presentation. “There was a long process of figuring out how to present the results on the global picture of health and nutrition in Nunavik,” she said.

“You can’t just say to women of child-bearing age, ‘don’t eat fish,’” said Sandra Jacobson. “They would miss the protein and the omega-3 fatty acids, which we and others have found to be beneficial for cognitive development. Nor are there a lot of alternative nutritional food sources in this region.” Instead, advisories were developed in collaboration between researchers and Nunavik public health officials, for women to favor Arctic char, a less-contaminated fish that is high in polyunsaturated fatty acids, and to decrease consumption of beluga whale meat, the main source of mercury exposure but not a major protein source.

Since first visiting Nunavik, Muckle has seen changes. The young generation generally has higher levels of education than their parents do and, thanks to television and the Internet, are more aware of what’s going on outside their region. “They are in a good position to address the great challenges their society is dealing with,” she said.

Muckle and her colleagues are now interviewing and testing adolescents and young adults in Nunavik as part of a CIHR-funded study––some of these participants were infants in the earlier cohort; and some will give birth during the research period. “We have another generation that we can compare to those we had participating 20 years ago,” she said. Whether prenatal exposures have increased or decreased and whether lower contamination or less consumption of traditional foods is the reason are among the questions the study will address.

The research on effects of contaminants on Nunavik children came about through the efforts of Éric Dewailly, M.D., Ph.D. who died in June in an accident on Réunion Island, where he was visiting with his family.

“His unique knowledge, his love for the North, and his presence will be greatly missed by all,” is how Minnie Grey, executive director of the Nunavik Regional Board of Health and Social Services, described the loss to the region.

In addition to his work on the Nunavik Child and Development Study, he had many other projects in the region, including a comprehensive health study in 2004 that is considered a model of circumpolar research (which he discussed in a 2010 interview in EHP). At the time of his death, he was preparing to undertake a new phase of this research in 2015.

While his colleagues are mourning his loss, Gina Muckle, Ph.D., whom Dewailly brought on as a post-doctoral fellow in the early 1990s, noted that his mentorship and generosity in introducing other scientists to Nunavik will help carry his work forward.