Cardiovascular diseases (CVD) are the leading cause of death worldwide, accounting for over 17 million deaths per year. Most CVD can be prevented by addressing risk factors such as obesity, high blood pressure, and diabetes. However, the relationships between these risk factors and CVD mortality can vary between populations, as shown by NIEHS-grantee Yu Chen, Ph.D., who examined the association between body mass index (BMI) and CVD mortality in more than 1.1 million south and east Asians.

According to Chen, better characterization of the relationship between BMI and CVD mortality in Asian populations could improve our understanding, awareness, treatment, and control of this major group of diseases. 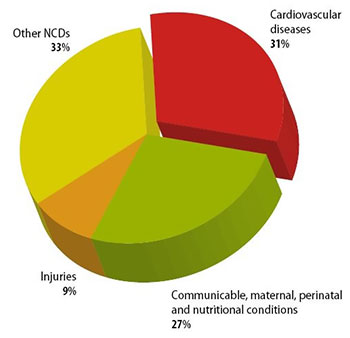 Cardiovascular diseases are responsible for over 17.3 million deaths per year and are the leading causes of death in the world.
(Photo courtesy of Global Atlas on Cardiovascular Disease Prevention and Control. Mendis S, Puska P, Norrving B editors. World Health Organization, Geneva 2011.)

Chen and colleagues conducted a pooled analysis using data from more than 1 million participants to compare the associations between BMI and CVD mortality in south and east Asians. “The large sample size allowed us to assess a wide range and fine categories of BMI values in relation to the risk of CVD subtypes, such as stroke and coronary heart disease,” Chen explained, “this may not have been feasible within individual cohorts.”

The data came from the Asia Cohort Consortium (ACC), a collaboration including more than 20 cohorts representing Japan, China, Korea, India, Taiwan, Singapore, and Bangladesh. Much of the data for the south Asia analysis came from the NIEHS-funded Health Effects of Arsenic Longitudinal Study (HEALS) cohort in Bangladesh.

The researchers found an increased risk of death from overall CVD, coronary heart disease, and stroke in east Asians with a high BMI. Low BMI was also related to an increased risk of death from CVD in east Asians. A low BMI may indicate a low level of circulating total cholesterol or triglycerides or other measures such as small thigh circumference that have been related to CVD mortality.

“To develop effective public health policies to reduce CVD mortality we need more information on measures such as body fat distribution which vary by population,” said Chen. Future studies including measures such as waist circumference, thigh circumference, or waist to hip ratio may be particularly important in assessing CVD risk in south Asians.

“Overall, our analysis stresses the role of higher BMI in the increased risk of CVD in Asians,” said Chen, “but physicians and policy makers should not overlook the risks associated with low BMI or that the relationship between BMI and CVD can vary by population.”

A Global Shift in CVD-Related Deaths

Over the past two decades, deaths from CVD have been declining in developed nations but have rapidly increased in low- and middle-income countries. Over 80% of the world's CVD deaths now occur in developing nations. Rapid urbanization, a shift towards a Western diet and lifestyle, and a lack of accessible and affordable health care all contribute to CVD disparities in low- and middle-income nations. Environmental exposures to indoor and outdoor air pollution are also associated with a significant proportion of the overall burden of disease from CVD.