Linking environmental exposure and disease is difficult because people are constantly exposed to a range of chemicals, from pesticides and industrial compounds to chemicals used in consumer and personal care products. A new silicone wristband, developed by a team of NIEHS-funded researchers led by Kim Anderson, Ph.D. , at Oregon State University, can absorb over 1,000 different chemicals, providing scientists with a simple way to characterize a person’s unique environmental exposures. Knowing this information will help scientists better understand how exposure to chemicals in the environment affects human health.

Silicone wristbands that can detect over 1,000 chemicals in the environment are being used to define a person’s chemical exposure.
(Photo courtesy of Kim Anderson)

“The wristband can answer questions about personal exposure to a range of chemicals that we haven’t been able to address at the individual level in the past,” said Anderson. Historically, personal samplers have only been capable of detecting a small range of targeted compounds.

To test these passive personal samplers, Anderson and her team recruited eight volunteers—roofers with a potentially high occupational exposure to polycyclic aromatic hydrocarbons (PAHs) from roofing tar. The subjects wore the wristbands for eight-hour stretches continuously for 30 days. After the sampling period, the wristbands were screened for over 1,000 environmental chemicals.

The researchers detected 49 compounds in the wristbands, including flame retardants, PAHs, phthalates, and pesticides, as well as caffeine, nicotine, and various chemicals found in consumer and personal care products. Twenty-five kinds of PAHs were extracted from the roofers’ wristbands. Roofers who wore less protective clothing and worked in more enclosed spaces had higher levels of the chemicals on their wristbands. 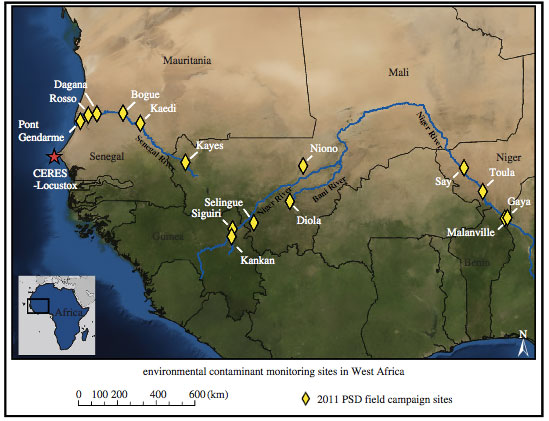 Map of the study area and monitoring sites where Anderson and colleagues deployed passive sampling devices in the water of the canals and drainage areas within the Senegal, Niger, and Bani Rivers and their watersheds. Source: Anderson et. Al., Phil. Trans. R. Soc. B 2014 369, 20130110 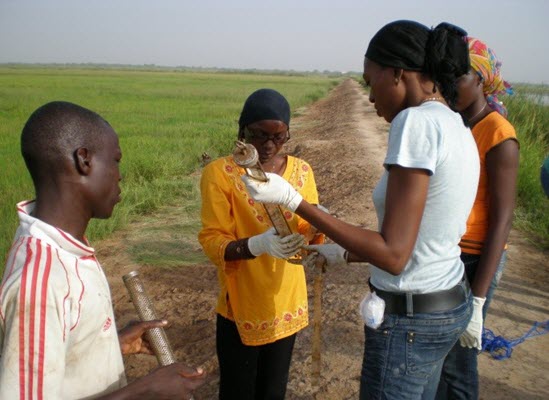 After training at OSU, Anna Ndiaye Traore (left) returned to Senegal to teach colleagues how to deploy passive sampling devices for pesticide monitoring in an irrigation canal. The wristbands, which will be deployed Spring 2014, will expand this project to monitor personal exposures to agricultural pesticides.
(Photo courtesy of Kim Anderson)

The OSU researchers also are testing the wristbands to characterize exposures in a community experiencing rapid agricultural and industrial growth in Peru. Women in the community will wear the wristbands as part of a study to monitor personal exposures from indoor cookstoves.

Characterizing exposure in developing countries can be challenging because of the lack of resources, infrastructure, and trained personnel to handle and analyze data from complicated sampling devices. The wristbands provide an appealing alternative as they are cheap, easy to use, and low maintenance.

Back in the lab, chemical analysis of the wristbands is also simple and cost-effective. “The methods used to extract and analyze chemical compounds from the wristbands is easy to learn and uses routinely available lab equipment,” said Anderson. “Coupled with ease of use in the field, these passive samplers are especially well suited for emerging countries and training and capacity-building projects around the world.”