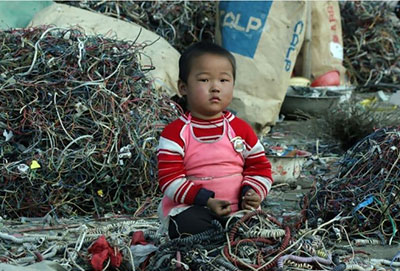 Adults and children, who often work and live amidst e-waste recycling centers, are exposed to a mix of hazardous chemicals.

As the global waste stream created by discarded electronic equipment grows—an estimated 40 million tons of electronic waste (e-waste) are produced each year—it is becoming increasingly important to understand how exposure to e-waste affects human health. E-waste is hazardous because the components used to make devices such as laptops, cell phones, and televisions, contain metals and chemicals known to harm human health. Children, who are especially vulnerable to the effects of e-waste, often work, live, and play in or near e-waste recycling centers.

E-waste presents a unique exposure scenario because people are exposed to a complex mixture of chemicals from multiple sources and through multiple exposure routes. “We know the toxicities and health implications of the individual components that make up e-waste, but we need to understand how these components potentially interact to affect human health,” said William A. Suk, Ph.D., Branch Chief of the NIEHS Hazardous Substances Research Branch. Suk served as a session co-chair at the June 2013 e-waste and children’s health working group meeting in Geneva, which was organized by the World Health Organization (WHO) and co-sponsored by the NIEHS.

E-waste is often exported to developing countries where workers use primitive recycling techniques, such as acid leaching and cable burning, to recover gold, silver, copper, and other valuable metals. Workers in so-called informal recycling centers are directly exposed to contaminants as they dismantle the discarded devices. Furthermore, primitive recycling practices release polyaromatic hydrocarbons, dioxins, and other hazardous byproducts into the environment. This environmental contamination exposes neighboring communities to the pollutants.

A team led by researchers from the WHO Collaborating Center for Children’s Health and the Environment at the University of Queensland, Australia, reviewed the evidence of exposure to e-waste and health effects in children and adults. They found a plausible association between e-waste exposure and thyroid dysfunction, adverse birth outcomes, behavioral changes, decreased lung function, and adverse changes that can be seen at the cellular level. While the review suggests exposure to e-waste is harmful to human health, the authors, who included members from the Department of Public Health and the Environment at WHO, called attention to the need for more research, especially in children and pregnant women.

The WHO, in collaboration with the NIEHS and other partners, recently launched an initiative to raise awareness and advance research on this emerging health threat, with a focus on how e-waste affects children’s health. Through the NIEHS-WHO Collaborating Center, coordination activities will bring together the researchers, data, resources, and infrastructure needed to develop and advance an international e-waste and children’s health research agenda.

The e-waste initiative was officially launched at the Pacific Basin Consortium for Environment and Health (PBC) held September 2013 in Hawaii. According to Suk, a focus of the PBC e-waste session was on the need for researchers to look at e-waste as a community issue. He explained that because many e-waste recycling centers are located inside villages or family units, it is important to understand how the community can play a role in reducing their exposures.

“Bringing together researchers, government officials, and health professionals to work with communities to develop prevention programs and practices can reduce the burden of disease in these populations and their children,” said Suk. “NIEHS can help build the research, communication, education, and training capacities necessary to do this on a global scale.”