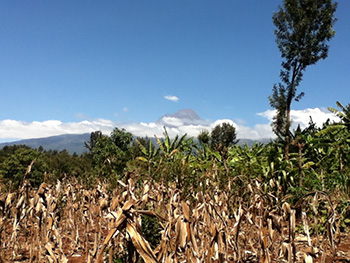 In Tanzania, mycotoxins are a common contaminant of maize crops. Dietary exposure to mycotoxins may play a role in the high prevalence of poor childhood growth throughout the country.
(Photo courtesy of Yun Yun Gong)

A group of researchers funded by the NIEHS and the Royal Society is examining how natural contaminants in food may contribute to poor childhood growth in Tanzania, a country where nearly half of the children under the age of five experience stunted growth. Despite efforts to address the direct causes of poor childhood growth — malnutrition and infection — the prevalence of impaired growth in Tanzania remains unacceptably high, suggesting there are other contributing factors. To better understand these less-explored factors, a team of researchers led by Yun Yun Gong, Ph.D., in collaboration with Martin Kimanya, Ph.D., and the Tanzania Food and Drugs Authority, examined the relationship between child growth and exposure to mycotoxins, which are common food contaminants in Tanzania.

Mycotoxins are chemical compounds produced by fungi that contaminate food crops. Aflatoxin and fumonisin are two mycotoxins common in Tanzanian maize and nut crops. Because maize-based complementary foods such as porridges, and ground nuts are given to breastfeeding children, many children in Tanzania are at high risk of exposure to these mycotoxins and to their potential health effects, such as poor childhood growth.

“Poor childhood growth is often associated with increased morbidity and mortality in early life,” Gong explained. “It can also have negative impacts on a child’s physical, psychological, and intellectual development, and compromises productivity during adulthood.” This study aimed to establish a link between mycotoxin exposure and reduced childhood growth in Tanzania.

They also found that children exposed to higher levels of fumonisin were shorter in height than were those who received less exposure. However, the negative association between aflatoxin exposure and child growth was not statistically significant.

Taken together, these findings indicate that exposure to high levels of mycotoxins in early life is widespread in Tanzania and may play a role in the high prevalence of poor childhood growth throughout the country. “Understanding exposure levels and establishing the link between mycotoxin exposure and child stunting provides evidence to support policies aimed at preventing childhood exposure in Tanzania and other areas of the world where similar contamination is likely,” Gong explained.