DOHAD: Addressing Determinants of Health Through the Life Course Around the World 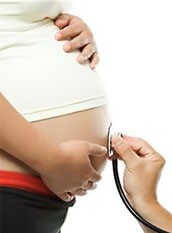 More than 20 years ago, David Barker, M.D., Ph.D., published research that showed a correlation between low-infant birth weight and adult death from coronary heart disease. In what came to be called the Barker Hypothesis, he found that a pregnant mother’s nutritional deficiencies not only affected her child at birth, but for decades later as that infant grew into adulthood.

Since then, this nutrition-related, early-life research has continued, while inquiry into the long-term effects of other prenatal exposures on adult health has also expanded. In the field of study now referred to as the developmental origins of health and disease (DOHaD) scientists seek to understand the connection between fetal exposures with negative effects — including environmental toxicants singly and in combination — and health conditions such as cardiovascular disease, cancer, and diabetes.

Jerrold Heindel, Ph.D., Health Scientist Administrator at the National Institute of Environmental Health Sciences (NIEHS), explains DOHaD as the study of any environmental factor that alters developmental programming in a way that leads to increased susceptibility to disease or dysfunctions later in life. Exposures experienced while in the womb may cause long-term damage because this is a vulnerable stage of development. During the prenatal period, when cell growth is occurring and tissues are forming, the human body cannot rid itself of many damaging chemicals because it does not yet have a fully developed immune system, blood brain barrier, DNA repair system, or a detoxification system to protect itself.

“Both poor nutrition and environmental exposures are likely occurrences for many populations, and thus a high percentage of individuals may be at risk for environment-induced diseases,” Heindel said.

The incidence of noncommunicable diseases (NCDs) — including cardiovascular disease, diabetes, cancers, and chronic pulmonary diseases — is increasing worldwide. According to the World Health Organization (WHO), the number of deaths attributable to NCDs has increased worldwide since 2000. Every year, 38 million people die from NCDs, with nearly 16 million dying before age 70. These diseases are now a leading cause of death in countries at all levels of socioeconomic development.

Urging adults to improve their diets, increase their physical activity, and limit their use of tobacco and alcohol are important public health messages. But to reduce adult NCDs, DOHaD research suggests that such messages and public health interventions should occur much earlier.

“Evidence suggests that much more attention is needed on early-life interventions, optimization of nutrition, and reduction of toxic exposures to curtail the increasing prevalence of NCDs,” noted a group of experts that included NIEHS Senior Public Health Advisor John Balbus, M.D., NIEHS and National Toxicology Program Director Linda Birnbaum, Ph.D., and Heindel, who collaborated on a 2013 Comment for The Lancet.

“A bad start lasts a lifetime,” said Heindel. “An important public health message is to find ways to help mothers improve their environment during pregnancy and in the first few years of life of their children.”

Sometimes real-world circumstances can prevent a person from relocating to a less polluted area, for example. In these cases, DOHaD research can help health care providers and caregivers become more aware of early signs of problems, such as lower cognitive abilities, impaired motor skills, or stunting, and intervene earlier in life to prevent or mitigate long-term problems.

Studying the Connections in Animals and in Humans

How can scientists connect early-childhood exposures with effects that take place decades, even generations later? Animal models have provided important clues: some toxicants cause what are called epigenetic changes in the offspring’s DNA. In some instances, the effects are not only from mother to child but can persist across several generations.

"Basic science offers insight to pathways and mechanisms," said Kimberly Gray, Ph.D., an NIEHS health science administrator. "The science is showing effects such as early exposures linked to mammary development, breast cancer, and other reproductive health outcomes in animal models. Using various methodologies and approaches, the human data is starting to confirm these findings, but we still need longitudinal cohorts to confirm the association."

Looking ahead, Gray said that improved techniques will assist in DOHaD research in humans as scientists are able to extract more information from cord blood, blood samples, teeth, and biomarkers. In the meantime, she noted research on humans has shown that exposure to toxicants can affect early motor and cognitive skills. “What we see is early exposure to specific chemicals has persistent effects, especially in the neurobehavioral field, even after controlling for all other factors,” she said.

NIEHS has been a global leader in supporting DOHaD research. “Three converging themes brought NIEHS into this area,” Heindel said. “First, it was always clear that development is a sensitive time for toxicants, as shown in animal models. Second, in the late 1980s and early 1990s, a class of chemicals was described that caused toxicity by acting on hormone receptor systems. Third, and critically, was the development of sensitive methods to detect changes in gene expression that resulted from exposure to endocrine-disrupting chemicals.”

As examples of support for research, NIEHS grantees are studying the long-term impact of childhood exposure to arsenic, the role of endocrine disruptors in obesity and diabetes, and when, during development, is the most critical time of susceptibility to the combined effects of environmental exposures and genetic factors. “The environmental area started in animals, while the nutrition area started with humans,” Heindel said. That said, a review of human studies on environmental chemicals and DOHaD through July 2013 found 343 publications, half of which were funded by NIEHS.

In October, NIEHS, along with the Endocrine Society, cosponsored the fourth International Summit of Prenatal Programming and Developmental Toxicity (PPTOX IV), to bring together leading experts in endocrinology, toxicology, and environmental health to provide interdisciplinary discussions on the current landscape, future directions, and ongoing global implications of early-life exposures in research, medicine, and regulation. (See the December Environmental Factor article for a brief summary; papers and presentations from the meeting will be published in 2015 by the Endocrine Society.)

NIEHS and NTP Director Birnbaum spoke during the opening session of the meeting. Her comments were directed toward the future of DOHaD research and resonated with the large and diverse audience. “As researchers, we must all work together across disciplines to expand our understanding of DOHaD beyond the initial nutritional component and into all environmental exposures, including chemical exposures and stress,” she stated.

NIEHS is also helping to coordinate DOHaD research related to environmental exposures in its role as a WHO Collaborating Centre. NIEHS and WHO convened a brainstorming session at PPTOX that brought together about 20 world experts to plan how to expand DOHaD globally and to increase its impact on human health.

The long-term implications make attention to DOHaD important, but at the same time, the time frame is difficult with so many other needs competing for attention. “Our challenge is how to keep people focused on looking decades or even generations ahead, especially when resources are limited,” Heindel said.