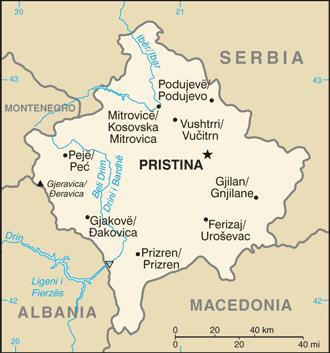 The difference in environmental lead between two towns in Kosovo (part of former Yugoslavia) provides a natural contrast to examine the effects of lead exposure on health. Women living in Mitrovica, the site of a lead smelter, refinery, and battery plant, are exposed to high levels of environmental lead. Women living in Pristina are relatively unexposed.
(Photo courtesy of Central Intelligence Agency [Kosovo], via Wikimedia Commons)

A new study by NIEHS-funded researchers at Columbia University suggests that lead exposure during pregnancy reduces maternal thyroid function, a condition associated with poor birth outcomes and lower IQ among school-aged children. Despite its high prevalence and adverse health outcomes, little is known about the environmental determinants of maternal thyroid dysfunction. This study, led by Pam Factor-Litvak, Ph.D., and doctoral student Linda Kahn, is the first to explore the relationship between lead exposure and thyroid function among pregnant women.

The thyroid gland produces hormones that help regulate metabolism. Hypothyroidism is a condition where the body does not produce enough thyroid hormone, causing many of the body’s functions to slow down.

“Hypothyroidism during pregnancy can be especially harmful to the developing fetus because the mother’s thyroid hormone regulates fetal brain development during the first and second trimesters,” Factor-Litvak explained. Children of mothers with overt hypothyroidism are at risk of cretinism, a condition of severely stunted mental and physical growth. Some studies suggest that subclinical maternal hypothyroidism is associated with reduced cognitive function in early childhood.

This research is part of the Yugoslavia Prospective Study of Environmental Lead Exposure, a longstanding population-based study funded by the NIEHS to examine the associations between lead exposure and adverse pregnancy and health outcomes. The cohort, which was established between May 1985 and December 1986, recruited women during midpregnancy from two towns in Kosovo, which was in the former Yugoslavia. Women living in Mitrovica were exposed to high levels of environmental lead from a nearby lead smelter, refinery, and battery plant, whereas women from Pristina were relatively unexposed.

The researchers collected blood samples from pregnant women enrolled in the study and analyzed them for blood lead concentration. Approximately 15 years after collection, the samples were analyzed for three measures of thyroid function—free thyroxine, thyroid stimulating hormone, and thyroid antibodies. These thyroid measures have been shown to resist deterioration during freezing, storage, and thawing.

These findings point to one potential mechanism by which lead exposure mediates maternal thyroid function. The increased levels of thyroid antibodies observed in women with high blood lead levels suggests that lead exposure triggers an autoimmune response that causes the body to produce antibodies that attack the mother’s thyroid gland and its hormone products.

These results have implications for low- and middle-income countries where lead is not closely monitored and lead poisoning is a serious health concern. From a public health standpoint, efforts to reduce lead exposure should continue to be a priority. “There are still areas in the world where people are exposed to high levels of environmental lead due to the mining and processing of lead and the recycling of batteries or other lead containing products. Our results indicate that maternal hypothyroidism may be a serious public health problem in regions where lead exposure is unregulated,” Factor-Litvak said.

Pesticide Use among Tanzanian Farmers in Africa 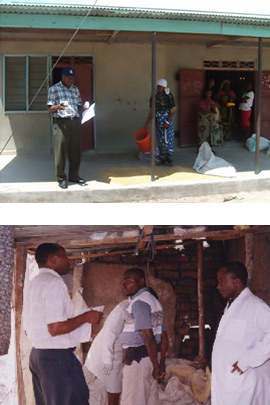 Researchers found pesticides stored in many homes throughout their field study.
(Photo courtesy of E. Lekei)

Pesticides are used around the world to control pests that affect crops. Estimates indicate that worldwide, hundreds of thousands of people die each year from pesticide exposure. The risk of exposure is exacerbated in low- and middle-income countries because farmers there often have less knowledge about adverse health effects of pesticide exposure and inadequate access to safe and effective personal protective gear.

In a recent issue of BMC Public Health, Elikana Lekei, Ph.D., and his colleagues Aiwerasia V. Ngowi, Ph.D., and Leslie London, Ph.D., investigated pesticide use in the Arusha region of Tanzania, Africa by surveying 121 farmers on their use, storage, and exposure to pesticides. More than 90 percent of the farmers surveyed had experienced a pesticide-poisoning event. “In our experience, pesticide poisoning becomes a 'risk of the job' that people become used to,” London says. “In developed countries, there are measures in place to control exposures, but these don't really exist in developing countries, and there is real pressure on farmers to use pesticides.”

Lekei said that one reason pesticide-poisoning events are so common among the farmers is because at least 79 percent store the chemicals in their homes to protect the costly products from being stolen. “Many farmers, particularly those with lower levels of education, are not aware of the health-related risks and the environmental hazards these chemicals pose for them and their families,” London says.

Pesticide application is another pathway for pesticide exposure. Although protective gear should not be the sole method to prevent pesticide exposure, it can help limit adverse events. The researchers found a significant association between poisoning events and nonuse of protective gear. About 40 percent of the surveyed farmers reported wearing protective gear like gum boots, long coats, hats, gloves, respirators, and facemasks. However, most of the protective items (60 percent) were damaged or contaminated, which may explain why the equipment is used so infrequently. Even when protective gear was used, it was often inappropriate or insufficient for the farmers’ uses.

Lack of information about the proper procedures for handling pesticides is a primary cause of their misuse, which is exacerbated when distributors repackage their products and sell them in smaller amounts without labels or safety information. In this study, the researchers found that 25 percent of products had been repackaged into secondary containers including paper and plastic bags and glass or plastic bottles.

Lekei and his colleagues also identified disposal of excess pesticides and empty containers as routes of exposure. Farmers reported disposing of unused pesticides by spraying them on crops or dumping them on farm ground. They got rid of empty containers by burying, burning, dumping, or selling them back to retailers. Some farmers reused the containers for household purposes, which poses serious exposure risks for all household members of the household.

The authors agreed that education is key to getting more farmers to store their pesticides outside the home. Information on pesticides, although available to farmers, is not effectively communicated. Pamphlets are often not legible or in a foreign language, for example. “Other studies we have been involved with have shown that typical hazard-communication tools, such as labels and pictograms, are not very good communication tools,” London said. “In fact, any communication tool requires training to support learning and understanding. I would also add that peer training by other farmers and experiential training, such as farmer field schools, are the best training methods. Simply giving farmers written information in the form of pamphlets or giving lectures are very poor methods.”

Farmers also can be taught self-surveillance skills that they can use when handling and spraying pesticides. “They can be taught how to recognize the signs and symptoms of pesticide poisoning, the adverse effects on their environment, and what the law says about use and disposal of pesticide wastes as well,” explained Ngowi.

The research team concluded that comprehensive interventions rather than solely knowledge-based strategies are needed to reduce exposure and health risks. Any strategy should include training, improving labeling, reducing barriers so that safe behaviors can be adopted, promoting control measures other than personal protective equipment, and supporting integrated pest management.

Jordan St. Charles, Ph.D., is an Intramural Research and Training Award fellow in the DNA Replication Fidelity Group at NIEHS.