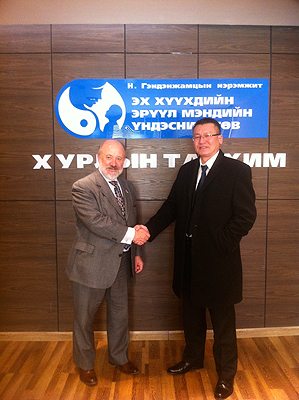 A world leader in child health and regenerative medicine, David Warburton, D.Sc., M.D., is an NIEHS-supported researcher working to build an environmental health training and research program to study the effects of air pollution across the lifespan in Ulaanbaatar, Mongolia. Warburton, the director of the Developmental Biology and Regenerative Medicine Program and vice department chair of pediatric surgery at the Children’s Hospital Los Angeles, is committed to understanding and mitigating air pollution and related health effects on children in Mongolia and has been advising his Mongolian colleagues on the subject for over a decade.

“Mongolia has undergone rapid urbanization and significant economic expansion since 1991, when the country emerged from Soviet domination,” said Warburton. “Because more than 50 percent of the Mongolian population is under 25 years of age, the impact of pollution will disproportionately fall upon children and young women of child- bearing age.”

Ulaanbaatar, the capital city of Mongolia, is situated at an altitude of 4,300 ft. and surrounded by mountains. In the winter, the city is subject to atmospheric inversion - where air above the ground is warmer than the air below it near the city - trapping pollutants at ground level instead of circulating them away.

Air pollution has recently become a major public health problem in Ulaanbaatar, with levels of particulate matter at more than 200 times the World Health Organization safety guidelines. Because of the extremely cold temperatures in the winter, with common daily lows of -40 degrees Fahrenheit, at least half of the Ger (Mongolian Yurt) dwellings are heated by burning coal in traditional stoves. Designed to burn dung or wood outdoors, these stoves burn continuously during the winter season causing concerning levels of carbon particulate indoor air pollution. Vehicle traffic has also increased dramatically throughout Mongolia in the last ten years, particularly in Ulaanbaatar. Private vehicles are often second-hand models that lack catalytic converters, which convert toxic byproducts of combustion to less harmful substances. 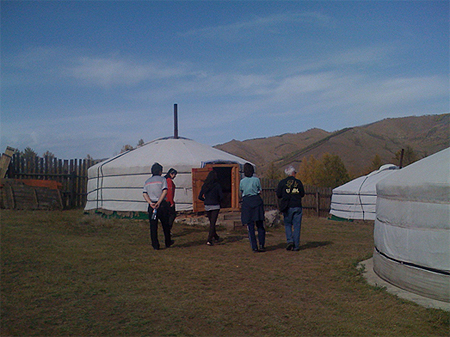 Felt lined tents, or Gers, are popular among herders in Mongolia. The Ger is heated by a stove standing in the center.
(Photo courtesy of David Warburton)

Warburton and his team found that lung function of children in Ulaanbaatar was significantly worse than children in a nearby rural area of Mongolia. “There is an urgent need for environmental health research and continued national implementation of an air pollution reduction program in Mongolia,” said Warburton. “Much more remains to be done to understand the dimensions of the pollution problem in Ulaanbaatar and to abate vehicular, industrial, and particularly domestic pollution levels back to the pristine environment it once was.”

With Warburton’s expertise in children’s health and passion for improving respiratory health for those living in Mongolia, he is leading the NIEHS-funded Mongolia/Southern California Environmental Health Research and Training Center (MSCEHRTC) to provide training and research opportunities in a partnership between the National University of Mongolia, the Health Sciences University of Mongolia in Ulaanbaatar, the Saban Research Institute, Children’s Hospital Los Angeles, and the University of Southern California (USC) in Los Angeles. The MSCEHRTC focuses on the consequences of atmospheric pollution and the introduction of sustainable control technologies in Mongolia.

The center is providing short- and long-term training opportunities in Mongolia, as well as opportunities in the United States for graduate degrees, visiting scholarships, and short-term training at the Children’s Hospital of Los Angeles, USC, and other sponsored centers. The center has also enlisted a number of local collaborators, including several national Mongolian agencies and ministries, to monitor air quality and weather conditions to continue to achieve reductions in air pollution.

The government of Mongolia recently demonstrated its practical commitment to the reduction of air pollution through its efforts to distribute 250,000 more efficient stoves to Ger dwellers, supported under a program funded by the World Bank, USAID, and Millennium Challenge Grant. This appears to have reduced carbon particulate pollution by as much as 30 percent over the past two years. However, peak levels remain unacceptably high.

A collaboration with NUM faculty Sereeter Lodoysamba, Ph.D., facilitated by the U.S. Ambassador Piper Ann Wind Campbell, will consist of detailed environmental particulate monitoring at sites around Ulaanbaatar over the coming winter season, plus the testing, analysis, and certification of new types of Ger stoves for winter heating.

“Focusing on personal air particulate exposure of children and pregnant women at our National Women’s and Children’s Hospital, where we deliver over 10,000 women per year is a very helpful project for Mongolia,” said Oyun Sanjassuren, Ph.D., Minister of the Environment and Green Development. “The hypothesis that particulate air pollution may be driving seasonal peaks in lung disease, stillbirth, and other adverse health outcomes is an important one. Warburton’s approach looks likely to provide important data to support and drive our clean air national policies."

Warburton also reestablished collaborations with his colleagues Shonkhuuz Enkhtur, M.D. and Baigalmaa Dashdendev, M.D., at the NMCMC to conduct new personal exposure and lung function monitoring studies in school age children, pregnant women, as well as in certain occupations such as doctors, ambulance drivers, traffic police, and even politicians and ambassadors to determine the variation in actual personal particulate exposures. Trainees in Mongolia are continuing to monitor personal exposures and test lung function in Ulaanbaatar.

"We have worked closely with Warburton and his colleagues from Children's Hospital Los Angeles for over a decade,” said Enkhtur. “The new NIEHS/Fogarty International Center award is going to be very helpful in building research capacity for our fellows and junior faculty at NMCMC.”

In his efforts to build environmental health capacity in Mongolia, Warburton has offered an advanced course in experimental design and statistical analysis at the NMCMC. He has also recruited several students for the M.S. and Ph.D. program in collaboration with a newly established graduate program in public health at the HSUM, run by Puje Puerevdorj, Ph.D., a recent graduate of another Fogarty/NIEHS training program. In addition, a panel of experts from the United States will travel to Mongolia in May of 2014 to conduct a conference and training workshop on health effects of air pollution across the lifespan, together with Mongolian colleagues from NMCMC, HSUM, NUM and the Ministry of the Environment and Green Development of the Government of Mongolia. Warburton is also planning an international symposium on pollution in Mongolia and other vulnerable parts of the world that will be hosted in Mongolia in summer 2015. 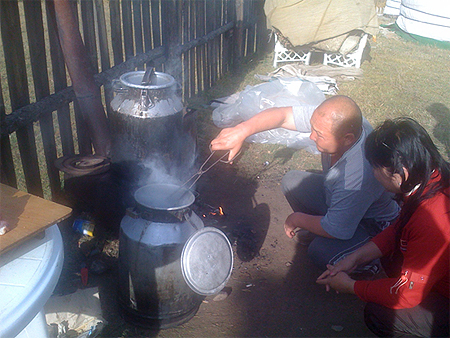 According to Warburton, “The Fogarty/NIEHS grant is a prudent investment in environmental research by the people of the USA in Mongolia, a friendly democratic country that is blessed with extensive natural resources, but has major heating related pollution and health impact issues in its capital city. What we learn together in Ulaanbaatar is highly likely to be also applicable in other major global cities with pollution issues, like Los Angeles, London and Beijing, etc. Our training programs will help position young Mongolian scientists, physicians and policy makers as leaders at the cutting edge of studying and hopefully fixing these global health problems.”